One of the reasons I chose to study at the college I am at now and on the course I am on now is that I thought it would help me to think through my own beliefs in a context where I wasn't being taught what to think. I was pretty much right in that assessment. No-one tells me what to believe. My main teaching this term is one hour a week with a liberal New Testament scholar, who sets me essays on aspects of Paul's writings, and I go away and read about them. 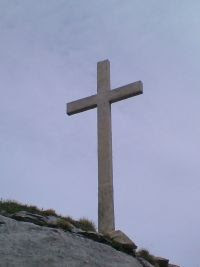 One of the things I am finding immensely encouraging as I do so is that although I am willing to question the extent to which my conservative evangelical background is consistent with what the Bible teaches, I am finding more and more that it's pretty much right in most of the important respects.

One example of this is over the whole question of Penal Substitutionary Atonement, as defended in books like Pierced for Our Transgressions (and the link was because the book wasn't on my official (vague) reading list, or in the college library here).

The doctrine of penal substitution states that God gave himself in the person of his Son to suffer instead of us the death, punishment and curse due to fallen humanity as the penalty for sin.

What has been especially striking in my reading for this is that the critics of penal substitution tend to fall quite quickly into heresy. For example, the famous criticism of it as "cosmic child abuse" clearly demonstrates that the author doesn't understand the doctrine of the Trinity (as expressed by Augustine, for example). And Gustav Aulen shows that he doesn't hold to Chalcedonian Christology (which is the standard for orthodox Christian understandings of the nature of Christ) when he sees it as a discontinuous divine work because it starts with the will of God the Father, but is completed by Jesus as a man.

21But now a righteousness from God, apart from law, has been made known, to which the Law and the Prophets testify. 22This righteousness from God comes through faith in Jesus Christ to all who believe. There is no difference, 23for all have sinned and fall short of the glory of God, 24and are justified freely by his grace through the redemption that came by Christ Jesus. 25God presented him as a sacrifice of atonement, through faith in his blood. He did this to demonstrate his justice, because in his forbearance he had left the sins committed beforehand unpunished— 26he did it to demonstrate his justice at the present time, so as to be just and the one who justifies those who have faith in Jesus.
Romans 3:25, NIV

The phrase translated "sacrifice of atonement" is the Greek word ιλαστηριον - hilasterion. In Greek culture, it meant a sacrifice that turned aside the wrath of an angry god (propitiation). In the Greek translation of the Hebrew Old Testament, it was the place where the blood of the sacrifice was sprinkled (mercy seat). Some people have also argued that it could mean a sacrifice that takes away sin (expiation). And there have been lots of arguments that it means one or the other.

It seems obvious to me that arguments that it means "propitiation" or "expiation" or "mercy seat" and not the others are probably wrong. It ignores one of the basic principles of translating from one language into another - there often isn't a word with the exact same range of meaning. In this case, it's pretty obvious that the word hilasterion covers all three of those - it's a sacrifice that turns away wrath and covers sin, with particular reference to the blood being sprinkled in the temple.

Besides that, the place of the argument in Romans means that just before the passage quoted, you've got everyone under God's personal judgement, condemnation and wrath. And just after it, you've got Christians justified. Something's got to have happened to that wrath. Likewise, verse 26 suggests that whatever happened in v25 meant that God could be both just and merciful, which kind of needs it to be some kind of "Jesus taking the punishment we deserve" thing.

Of course, it's in plenty of other places in the New Testament too - it's obvious in Hebrews, but Romans 3:25 is the passage I was discussing.

What I found particularly interesting was that in discussing this with the aforementioned liberal NT scholar, he only ever argued what the primary meaning of verses was, not whether the logic required penal substitution or whether the meaning was present in the verses.

My understanding of the conservative evangelical position is that Penal Substitutionary Atonement is an important way of describing what happened on the cross. It is by no means the only way, but it is an important one, not least because it helps explain how some of the other ways work.

All the literature I've read and all the conversations I've had that try attacking it tend to go one of two ways. Either they rapidly degenerate into heretical gibbering (denying the Bible provides a valid account of what Jesus did on the cross, and/or denying the conclusions of one of the major Church Councils) or they attack the idea that Penal Substitution is the only way of explaining it. But as they say in Pierced for Our Transgressions:

"The doctrine of penal substitution states that God gave himself in the person of his Son (Jesus) to suffer instead of us the death, punishment, and curse due to fallen humanity as the penalty for sin."

Hmmmm........ if your idea is true the crucifixion of Jesus would have been the resolving end of all issues between you and God. However Jesus says that the issue of guilt relative to sin remains as the outstanding issue between you and God AFTER his crucifixion. What have you to say about Jesus' statement in Jn. 16:8?
God says in Gen. 9:5 NIV (the NIV being about the clearest on this point) that whenever any man looses his life by bloodshed God demands (requires) an accounting. What would you think the required accounting might be?
There is at least one sin that must be repented of to obey the Acts 2:38 command. What do you think think this sin might be relative to the outstanding issue in Jn. 16:8?
Heb. 7:12 says that a change has been made to the law of God and Rom. 5:20 says a law has been added. What law?
Theodore A. Jones

(I don't think I've ever met anyone called Theodore...)