Interesting film, this one. It's in a slightly fictionalised setting, with the Maya people of what is now Mexico, set in about 1500. A Mayan war party raid a village, and take the survivors to one of their cities. One of them escapes, wanting to rescue his wife and son, and the Mayans chase him. 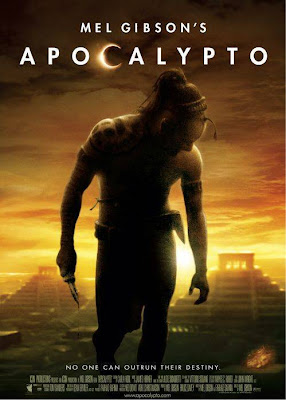 The film that sticks in my mind as being most similar to this is the Arnie classic Predator. Levels of violence are fairly similar, they're both high-paced, with a lot of running round in jungles and a hero who is willing to go through pretty much anything to save (in this case) his wife and son. If you're sensitive to violence, don't watch it. Apocalypto famously shows some human sacrifice, but actually I found the violence much less disturbing than in Pan's Labyrinth (to give the example of another film I watched recently).

What it does have that Predator doesn't really is a bit of thought-provokingness. The Mayans are seen destroying their environment and running their empire on the backs of the poor, which, as the opening quote tells us, shows that they have the seeds for their own destruction.

There was a whole load of historical controversy with this one, with some historians saying "Oh, they didn't really sacrifice people, those wall paintings just mean something else." My response to that is that I think human civilisations are perfectly capable of human sacrifice, and we'd probably still be doing it if it wasn't for the influence of the Gospel on our culture. Maybe we still are (ref). It's all very well to try to pretend that all cultures are equal. If you assume an absolute morality (e.g. human sacrifice being wrong), they aren't, because your absolute morality will be better reflected in some cultures than others, especially if it's implicitly based on a Judaeo-Christian framework. People aren't inherently more valuable than each other or inherently better than each other. There but for the grace of God go all of us.

Overall, I thought this was a good fun film, but then I'm (for historic reasons) desensitised to violence that doesn't actually show stuff being cut and so on. Seeing the back of a man with a spike through him, or a heart having been ripped out of the body doesn't cause me too many problems, unless I see it actually being ripped out, which we thankfully don't.

Oh, and those Aztec / Mayan step pyramid things? They look interesting and all, but this film was a useful reminder that they are actually horrible things...