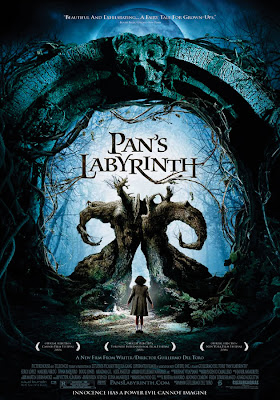 I generally like fairly dark films, and this one is very dark and gets good reviews from people who usually agree with me. So I wonder why I didn't like it. Maybe it's because my prejudices against fauns, and things looking like that, and voices that deep made me think of him as evil from the start. (On the prejudices against fauns thing, I remember a discussion where someone managed to persuade me that Mr Tumnus in the Lion, the Witch and the Wardrobe was probably gay instead of being a child molestor, which was my first reaction.)

Maybe it was the way that he could just as well have done the things he asked Ophelia to do, which suggested there was something nasty going on. Maybe it was the way that the good characters were the ones who disobeyed authority, though sometimes disobedience is the right thing to do. Maybe it was the fact I never got close to understanding some of the motivations - like Ophelia's behaviour around the Pale Man, or the faun's motivations, or Ophelia's mothers motivations for going with the Captain. Maybe it's because the redemption theme didn't work because I thought it was fiction and so taglines like "innocence has a power evil cannot imagine" just didn't seem to resonate with the film. Or maybe the whole thing just creeped me out a little too much. Yes, there's a running theme of self-sacrifice, but I'm not convinced that works either.

Anyway, the film is described accurately as a very adult fairy tale. It's set during or just after the Spanish Civil War, where a young girl and her widowed mother go to stay with a sadistic Fascist army captain. She gets involved with a fantasy world thing, which may or may not be real. There's some pretty nasty violence and torture; no sex.

It's well made, lovely music and all, but I just didn't like it. Oh, and what's with all this thinking that Guillermo del Toro is a genius? His previous film was the eminently forgettable Hellboy.