One of the things that winds me up about Bible overviews is that they always seem to take the same point of view, usually based on Graeme Goldsworthy's People / Place / Presence idea. It's a good way to do a Bible overview, but it only gives one perspective and there's so much more to see! Chris Ash here chooses a different point of view - the point of view of scattering and gathering.

I'd strongly recommend the book to anyone who has done a Bible overview from the Goldsworthy point of view (or read its best write-up in God's Big Picture by Vaughan Roberts) and wants something a bit different. From my point of view as a Bible teacher, the first two thirds was good but not much new except for his wonderful treatment of Babel. The last third or so of the book, where he gets on to talking about the Church, was spectacular.

The thesis of this chapter, indeed the theme of the book, is precisely this: the ordinary local church with all its imperfections, weaknesses, oddities and problems, has within in the seeds, the spiritual and relational genetic blueprint, of a broken world remade.
p.138

When I walk in Jesus' footsteps and become 'like a child' I will willingly receive 'a child' into my group. Only when my self-perception is that I am a despised nobody will I welcome other despised nobodies into my fellowship. Only when I am deeply humbled will my door be open to the lost, the struggling and the desperate. 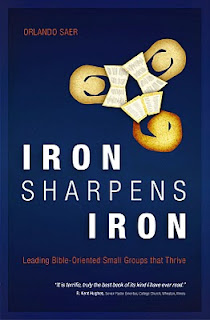 This is by far the best book I have ever read on how to lead a small group for Bible study and prayer. If I was training Bible study leaders, I'd seriously think about using it as a curriculum. When I'm next in charge of homegroups, I may well buy every leader a copy and ask them to read it.

Having been a homegroup leader for many years, and been in homegroups or Bible Study Groups in many different churches and CUs, there's nothing especially new or revolutionary in it, but it's an excellent compendium of best practice and training.

I bought it because of the number of recommendations I'd seen from people much more knowledgeable and experienced in this area than me. The recommendations were, of course, right.

The Importance of Prayer

I'm being really challenged at the moment about the importance of prayer. Just this morning, I was reminded from Ephesians 2 that by nature we are dead and objects of wrath. What hope therefore can there be for us to act in our own strength? What hope can there be that people will respond to preaching or to evangelism unless the Holy Spirit of God moves them. And if he moves us, how can we resist?

It is frequently a disappointment to me that so few books on preaching speak much about prayer. A great exception, of course is Spurgeon's Lectures to my Students.

If you can dip your pens into your hearts, appealing in earnestness to the Lord, you will write well ; and if you can gather your matter on your knees at the gate of heaven, you will not fail to speak well. Prayer, as a mental exercise, will bring many subjects before the mind, and so help in the selection of a topic, while as a high spiritual engage ment it will cleanse your inner eye that you may see truth in the light of God. Texts will often refuse to reveal their treasures till you open them with the key of prayer.

The minister who does not earnestly pray over his work must surely be a vain and conceited man. He acts as if he thought him self sufficient of himself, and therefore needed not to appeal to God. Yet what a baseless pride to conceive that our preaching can ever be in itself so powerful that it can turn men from their sins, and bring them to God without the working of the Holy Ghost. If we are truly humble-minded we shall not venture down to the fight until the Lord of Hosts has clothed us with all power, and said to us, " Go in this thy might." The preacher who neglects to pray much must be very careless about his ministry. He cannot have comprehended his calling. He cannot have computed the value of a soul, or estimated the meaning of eternity.

How much of blessing we may have missed through remissness in supplication we can scarcely guess, and none of us can know how poor we are in comparison with what we might have been if we had lived habitually nearer to God in prayer.

Brian McLaren and the Kingdom of God

When Jesus began his preaching, his message was this: “The Kingdom of God is near. Repent and believe the good news.” (Mark 1:15). And in the last few years, at least three groups within the Church have really taken on board this idea. I'm part of two of those groups (conservative evangelicals and charismatics), and I've got friends and colleagues who are very sympathetic to the other one (Brian McLaren and the Emergent Village). I've heard both very good and very bad things about McLaren, so I thought it worth getting to grips with him and his message. Following the recommendation of a friend who likes McLaren, I've read his book “The Secret Message of Jesus” as a way in (Thomas Nelson, 2006). What follows is therefore part book review, and part essay on the significance of the phrase “Kingdom of God”.

McLaren is quite open about the fact he is reacting against those who proclaim Jesus as their personal Saviour, but where Jesus doesn't make a difference to their lives – those who see Jesus as their Saviour, but not their Lord, and also against those who use the Bible as a way to condemn others' morals and so on. Of course, the danger with reactionary theologies is that they over-react and ditch the baby with the bathwater. And such seems to be the case here.

He sees the central teaching of Jesus as the proclamation of the Kingdom of God, and the central feature of the kingdom of God being our horizontal relationships with each other as part of God's new community. And his vision of this new community (largely around the Sermon on the Mount) is at times well-explained and moving, but fundamentally lacking. For example, here he summarises the purpose of Communion:

a kind of regular recommitment where people say, by gathering around a table and sharing in bread and wine, that they are continuing Jesus' tradition of gathering in an inclusive community. (p.166)

My alarm bells started ringing in the introduction. McLaren writes: “For example, you may wish that I had said more on particular dimensions of Jesus' message or life which are of special importance to you.” (p.xvii) Then there's an endnote, which when I chased it up told me that Jesus' death was considered as one of the “dimensions that might be of special importance to some readers”!

That's not to say that McLaren ignores Jesus' death. He does however take a thoroughly Girardian take on it, though not as well worked through as Girard himself. (Girard argues that Jesus in his death takes the violence of the mob on himself and so exposes the roots of human violence and scapegoating, in doing so opening the way for a new kind of society. I think he's right, but his approach can only be one facet of the truth.) McLaren, however, is more scathing about particularly Penal Substitution.

When we think of the language of Jesus' secret message, we realise quickly that for many people these days, to mix a political term like kingdom with a religious term like God sounds... scary, even terrorizing. We can't help but think of the dangerous religious-political cocktails of crusade and jihad, colonialism and terrorism, inquisition and fatwa – manifested in oxymoronic terms like holy war and redemptive violence. (p.149)

What's “redemptive violence” doing in that paragraph? Isn't it a kind of “guilt by association? And what would someone who wrote that think of Hell?

But all of that is side issue. For me, the central weakness of McLaren's work is that he misses the main point of the Kingdom of God. The main point of the Kingdom of God is God's King. “Christ” is a royal title – it's used of God's anointed kings in the Old Testament (e.g. 1 Sam 24:6). The proclamation of the Kingdom of God is picked up by the apostles precisely because it is the proclamation of Jesus as Lord and Christ. McLaren is at his absolute weakest in chapter 9, when he discusses how the apostles carried on Jesus' teaching. He picks up on the few references to the “kingdom of God” without looking at what the apostles actually preached, which was much closer to the fact that Jesus Christ is Lord, which McLaren seems to totally ignore.

McLaren's kingdom, good though some of the descriptions are, and helpful though his exhortations to follow the ways of the kingdom are, is ultimately a kingdom without a king. This is particularly striking in chapter 16, where he argues that Jesus wouldn't have used Kingdom language at all today, and discusses what else he'd have called it. His suggestions (the dream of God, the revolution of God, the mission of God, the party of God, the network of God, the dance of God) are all notable because they aren't anywhere as hierarchical as the kingdom language that Jesus used. It is the Kingdom precisely because Jesus is the King.

For McLaren, Jesus seems reduced to being the potentially divine revealer of a better way who then disappears from the picture as all are welcomed into the inclusivistic dance - rather than the enthroned King of the Universe, who we are invited to know for ourselves. And of course that knowledge should be one that makes us into a new community and that follows him as Lord, but that is what the Church has always preached, and there's no reason to ditch it.