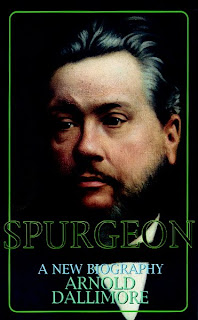 I started reading this book as part of Tim Challies' Reading Classics Together. That looks like a good idea for reading difficult stuff together, but 2 chapters a week is too slow a pace for a book I enjoy reading, as I did this one, so I finished it way ahead of schedule. Still, thanks to Tim Challies for suggesting it.

As a source on information about Spurgeon, it's pretty good. I'd heard of him, of course, but not realised quite how much God used him, and if this biography was aimed to make readers more fans of Spurgeon and wanting to read more of his work, in my case it certainly succeeded.

It was a great read, but I don't think it worked as a biography for several reasons. One was that I think by the end of the book we got to know Spurgeon as fans, but not as people who knew him did. We don't really get to know Spurgeon - he's always at arm's length. I guess that's especially true of his childhood. So when Spurgeon starts preaching at 15, or becomes pastor of a church aged 17, he seems almost a curiosity, rather than understanding where that came from or even what sense of calling he felt to it.

Dallimore comes across as a huge fan, which is ok in a biographer. But he also reads too many of today's controversies into Spurgeon's life. So, for example, chapter 19 contains this section:

This opposition to evangelical truth sprang first from the publication in 1859 of Darwin's Origin of Species. Teaching that life had originated not by divine creation but by blind chance, it directly contradicted the Scriptures and obviated the very idea of the existence of God.

Dallimore then goes on to conflate Darwin's ideas with the later German theological liberalism, and cites Spurgeon numerous times against liberalism to show that he also opposed Darwinism. Never once does he cite Spurgeon on Darwin. Now I'm not a 19th century historian, but as far as I can tell, Dallimore there is taking two different (but possibly linked) things, and saying they are the same. In doing so, he assumes lots of stuff about Biblical interpretation and theology of science, which I don't think is justified.

He's also very reticent to say that Spurgeon drank alcohol and smoked - it's almost as if he sees writing the book as a hagiography rather than a biography, and he wants Spurgeon to conform to his own culturally assumed norms of holiness. Though to be fair, he does include both, as well as mentions of Spurgeon's depression, though he always links that as a symptom of his gout.

I don't doubt that Spurgeon was a great man of God, and Dallimore gives us some great insights into how God used him, and what his priorities were. As a record of Spurgeon's life, this is good, and it's a good introduction to the man, but I wouldn't class it as a great biography.

Dallimore is more famous for his two-volume biography of George Whitefield, which I haven't read. On the basis of reading this, I'm more likely to read it, and I hope it gives us better insight into the man himself and what drove him and led him to become the man he was.

I've just finished reading a biography of the great Victorian preacher CH Spurgeon, of which more to follow.

But here are a few quotes from the great man:

Better abolish pulpits than fill them with men who have no experimental knowledge of what they teach... He who presides over a system which aims at nothing higher than formalism, is far more a servant of the devil than a minister of God.
Lectures to my students, p.5

A man who has really within him the inspiration of the Holy Ghost calling him to preach, cannot help it - he must preach. As fire within his bones, so will that influence be, until it blazes forth...
Autobiography

Are churches in a right condition when they have only one meeting for prayer in a week, and that a mere skeleton?The Sword and the Trowel, August 1887

"Do not enter the ministry if you can help it," was the deeply sage advice of a divine to one who sought his judgment. If any student in this room could be content to be a newspaper editor, or a grocer, or a farmer, or a doctor, or a lawyer, or a senator, or a king, in the name of heaven and earth let him go his way...
Lectures to my students, p.23

True preaching is an acceptable adoration of God by the manifestation of his gracious attributes : the testimony of his gospel, which pre-eminently glorifies him, and the obedient hearing of revealed truth, are an acceptable form of worship to the Most High, and perhaps one of the most spiritual in which the human mind can be engaged.
Lectures to my students, p.54

If My Nose Was Running Money...

Dinosaur Comics is frequently just weird, but this is magnificent... 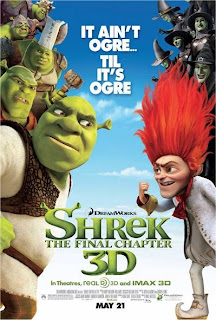 Yesterday, we went to see Shrek 4 - "Shrek - Forever After" at the cinema. Not the 3D version, because that's just a silly overpriced gimmick which means you have to keep your head vertical...

Shrek 1 was a work of genius in the way it reworked fairy stories and went against the grain. Shrek 2 was a pretty good continuation of it, that heavily referenced and parodied modern culture. Shrek 3 was so easily forgettable I can't find anyone who can remember it well, though I've found several people who think they've probably seen it.

Shrek 4 doesn't parody anything really. It just uses most of the same characters, with one new major character (the evil Rumplestiltskin), who is largely as in fairy tales rather than being a clever twist on it. It's a fun film, and a decent one - probably better than 3, but nowhere near either 1 or 2 in standard. There are a couple of really clever moments, and one really romantic one, but they're the exception rather than the rule.

It's like they tried writing a decent-ish story with the same characters (albeit in a parallel universe where Shrek was never born), and it's just all a bit too pedestrian in comparison with the first two - as if the clever writers had run out of steam. Fun, but not fantastic.

A(nother) Flaw in the Rules of Football

Last night, Uruguay were playing Ghana in the World Cup. In the last minute of extra time, the score was 1-1, and Ghana had a very good shot on goal. The Uruguayan striker Suarez quite clearly pushed the ball off the line using his hands. He was sent off; Ghana missed the resulting penalty; Uruguan went on to win on penalties.

The problem is this: As the rules stand, Suarez's action was sensible and was self-sacrificially doing the best thing for his team. Had he not handled the ball off the line, his team would have been knocked out. As it was, handling the ball off the line ensured that his team still had a chance of going through, a chance which they duly took. The rules therefore encourage fouls in such situations.

The most obvious modification to deal with this would be the introduction of a penalty goal, as in Rugby. The rule would run something like this:

If a player commits a foul to prevent an otherwise certain goal, they shall be sent off and the referee shall award a goal to the side and player that would have scored had the foul not been committed.

This is an extract from an e-mail sent to me by a friend of mine who is involved in mission in the Muslim world...

Now considering the strategic importance of Islam, what percentage do YOU think the Church allocates to North Africa and the Middle East - the heartlands of Islam?

Think of a number before you scroll down...

I ask myself a simple question:

"Is this really the result of a Spirit led strategy in the Church?"

Or does it show that the global Church would rather put resources into more 'responsive' areas (which often already have flourishing Christian populations?)