Continuing on from my last post, here are some more Wordle images from the text of the ESV translation of the Bible. I'm using the ESV because it's fairly literal - so it gives you a good idea of what the underlying words are in Hebrew and Greek. Although I'd rather use a translation which is gender-neutral when the underlying text is gender-neutral, the ESV is much more readily available in electronic format than the NRSV.

Anyway, here's a Wordle image for the gospels: 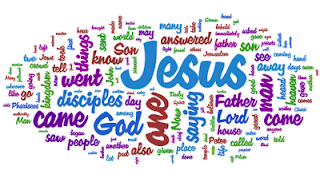 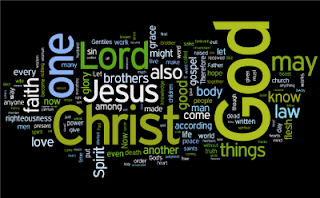 Here's one for the rest of the New Testament: 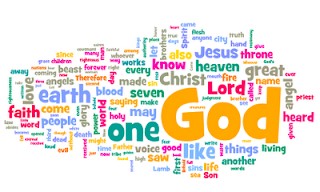 Which can be subdivided into the General Letters: 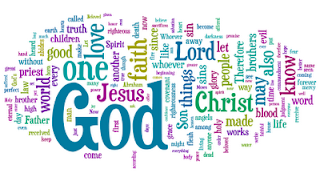 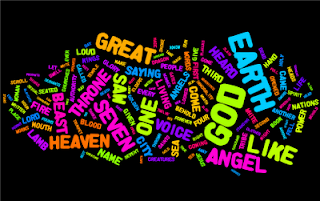 Here's one for the whole NT: 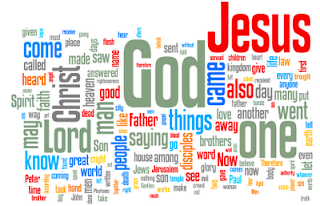 I've spent a bit of time today tinkering with Wordle, as previously featured here. Here are some of the results - all were created using Wordle, all use the ESV. 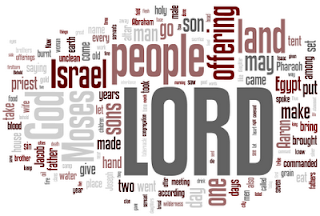 The "historical books" (Western classification rather than Hebrew one): 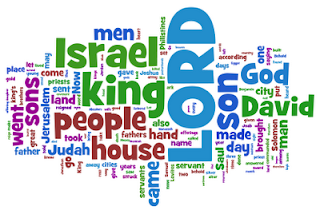 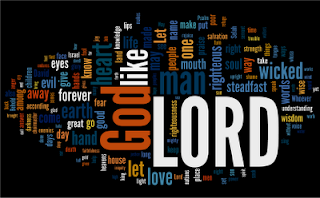 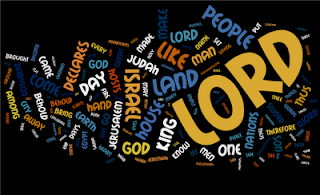 And here's the whole Old Testament: 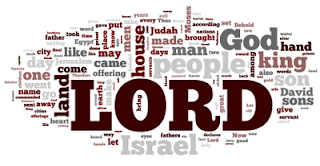 I'm genuinely happy that TV ads which are sexist against women aren't allowed any more. But it still seems ok to do ads which are sexist against men. Take for example a recent Boots ad, which presents a man as malingering in bed with a cold, and his wife with the same cold carrying on doing shopping and looking after children. This seems to be presented as a typical situation.

Email ThisBlogThis!Share to TwitterShare to FacebookShare to Pinterest
Labels: rants

It is good news that God is gloriously happy. No-one would want to spend eternity with an unhappy God. If God is unhappy, then the goal of the gospel is not a happy goal, and that means it would be no gospel at all. But, in fact, Jesus invites us to spend eternity with a happy God when he says, "Enter into the joy of your master" (Matthew 25:23). Jesus lived and died that his joy - God's joy - might be in us and our joy might be full (John 15:11; 17:13).

John Piper (in the introduction to The Pleasures of God, strongly recommended a book called The Life of God in the Soul of Man by Scougal, so I'm having a go at reading it. Here's a quote from near the beginning that really struck me.

There are but too many Christians who would consecrate their vices, and follow their corrupt affections, whose ragged humour and sullen pride must pass for Christian severity; whose fierce wrath, and bitter rage against their enemies, must be called holy zeal; whose petulancy towards their superiors, or rebellion against their governors, must have the name of Christian courage and resolution.

I've been thinking a bit recently about how Jesus tended to answer difficult questions. When they came from people who were out to trap him, he tended to answer them with another question of his own which exposed either the underlying false assumptions or the underlying hypocrisy.
So what would this look like with the whole issue of Old Testament genocides? Maybe something like this...
[Questioner] Doesn't God command lots of genocides in the Old Testament?
[Jesus] You answer me a question first. Was William the Conqueror a war criminal or not?
Just a thought...
Posted by John at 4:39 pm No comments:

Part of the problem is that whoever put the Church calendar together made a silly mistake. In the official church calendar, the season of Christmas starts on Christmas Day, and then runs for a few weeks. But that's exactly opposite to how festivals work in the Old Testament and in common sense. In the OT, if festivals run for a week, the big event is at the end of the festival, not the start. Otherwise everything else is anti-climactic.

So by trying to say that the holiday starts with Christmas (as some rule-following liturgical purists claim), if we're going to avoid all the rest of the season being an anti-climax, we need something at least as big to end it. Some people try doing that with Epiphany, but it doesn't really work. Not in the West, anyway. So what happens is that New Year gets seen as the end of the festival, and then becomes the natural place to transfer the real celebrations too. Which is probably why New Year is getting bigger and bigger, partly at the expense of Christmas.

The obvious solution is to allow a decent period of time before Christmas - say 2 weeks or so - as a build-up to Christmas, with Christmas as then the climax of the festivities. Which makes Advent difficult again...

Advent is traditionally a time for thinking about the "four last things" - death, judgement, heaven and hell. As such, last Sunday fit fairly well with the end of our series on the Creed - thinking about Jesus coming again in glory to judge the living and the dead, and his kingdom having no end.

I was preaching on this on Sunday, and made reference to Communion being a foretaste of the eschatological feast, except I said it in English. And I quoted "until he comes again" from 1 Cor 11:26 and the Anglican liturgy. And then, in the rest of the service, I noticed that those references were completely missing from the liturgy, because we were using Prayer H, which is the one normally used in Anglican Charismatic circles. I'm normally a fan of prayer H, because it misses out so much of the waffle that characterises the other prayers, which means it's more family-friendly and so on. But it also misses out all reference to Jesus' coming in glory. Why couldn't they just have put in "until he comes again" somewhere?