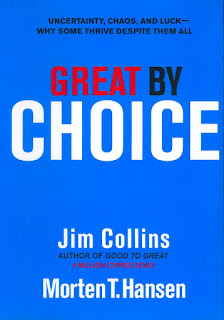 Who is Jim Collins?

In my experience, Jim Collins is the secular leadership thinker who is most often cited by Christians. Ideas such as the level 5 leader (from Good to Great) and the BHAG (from Built to Last) are common currency in open and charismatic evangelical leadership. He used to be a lecturer at Stanford Graduate School of Business, but is now an independent management consultant who runs his own “management laboratory” and spends most of his time speaking and doing research. He has spoken at the GLS four times, more than anyone else except Hybels.

In 2005, he professed to be surprised by how popular Good to Great had been among nonprofit organisations - between a third and a half of all readers32, and therefore decided to write a supplement to the book which discussed some of the differences between business and non-business and applied his work more broadly.

One of the most striking features of Collins' work, and one which explains why it is so popular amongst Christians, is the idea of the Level 5 Leader, introduced in Good to Great and recurring in all his subsequent books. He found that companies that become great and stay great have a particular type of leader to start with. In Collins' own words: Level 5 leaders embody a paradoxical mix of personal humility and professional will. They are ambitious, to be sure, but ambitious first and foremost for the company, not themselves.

Level 5 leaders, notes Collins, are so important because they enable others to become great too. As Lawrence and others have pointed out, this ties in strongly with the Bible's picture of leadership because it reflects the character of Christ who surely is the perfect embodiment of the combination of humility and will. It is also encouraging for Christians when we find ourselves under pressure not to be humble. Can we then learn more about what the combination of humility and will looks like from the examples Collins cites?

As part of my curacy, I wrote an essay evaluating the whole trend of secular leadership thinking in the church, with particular reference to Jim Collins' book Great by Choice.

Welcome to my blog!

Welcome to my blog, particularly for people who are new here! Or rather, welcome to my older blog. Most of the stuff on here goes back many years; there's a decent fraction of it I really don't agree with - notably I've changed my mind on issues of charismatic gifts and experience and women in ministry. The main emphasis here is on church politics and theology, and I don't update it very often - my newer, shinier, more relevant-to-me blog is here.