This is a very strong contender for the title of Cheesiest Film of All Time. I'm struggling even to think of anything in the same league as it. 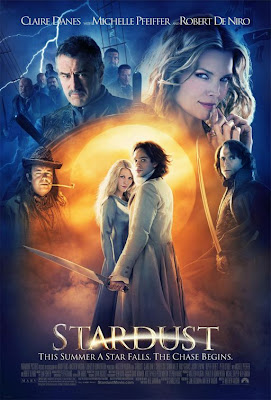 The closest film to it stylistically that I can remember is probably the Princess Bride (both fairytale-style funny romances), but Stardust has much better special effects (not hard), less humour (but still got some), more famous actors, more magic and almost infinitely more cheese. Because of that, it's not as good at the Princess Bride, but it's still worth a watch.

Among the cheesy elements were: old men with significant martial arts skills, a chorus of ghosts, a "hard guy" who is a closet extremely camp transvestite, repetition of cheesy lines at important points in the plot, music that completely conformed to the cheesy stereotypes, wicked witches, plot developments that may or may not have been intended as twists (it's hard to tell sometimes), non-tragic use of dramatic irony, people revealing the secret of their strength during combat, ...

The only thing it didn't have was a song for everyone to sing at the end.

Potentially great family film; there's some extramarital sex and some interesting ways to die, but you don't see anything in either case.

Now, thats interesting. We went during the week and came away rather disturbed. No denying it is a great film (if a little predictable) but we were all rather concerned by the pg rating. the whole scene at the end with the voodoo doll and deaths, the implied rape of the girl on the pirate ship, the sex; all that to my mind should not be in a childrens film.
Ok so most of it was only implied and never explicit, and a lot of it would go over the head of most small children, but even so.
Oh and, if you stayed for the credits you almost got the cheesy singalong to Take That! Not one of their best songs, but I'm not complaining too much!

Maybe not little kids then. It's not a kids' film like the Lion King or something - it's probably slightly more adult than The Princess Bride, but less so than Little Shop of Horrors (domestic violence, sado-masochism, chopping dead bodies up with axes, giant man-eating plant), and LSoH is PG and was a film I really liked as a young teenager.

Cheesy...I guess so but I loved the book and the movie (the book differed a little-in the movie I think they added the De Niro part just for him and he was great). Maybe you just had to grow up loving fairy tales and fantasy. This is a movie I'll watch over and over.