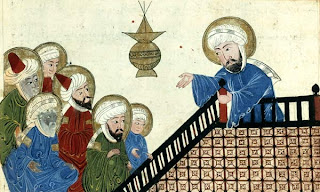 Silly mess with Gillian Gibbons getting jailed for letting her class vote to call the teddy bear Mohammed. The whole thing raises far too many questions...

(NB - the picture on the right is a picture of Mohammed (the famous one), but it was made by a (Persian) Muslim in the 16th century, so it's probably ok). From Wikipedia.

Some Muslims may have painted images of Muhammed, but that doesn't necessarily prove anything more than some of the utterances of Don Cupitt, Anthony Freeman etc prove anything about Christianity or Anglicanism.

I say 'necessarily'. The paintings may be more widespread and orthodox that the Sea of Faith, but I don't have any idea about it. Perhaps you do? Were a lot of the images painted by Sufis, possibly?

Mostly Shias, I think, who historically have taken a different attitude to the whole images thing. The strict prohibition is traditionally a Sunni thing.

I'm happy to accept that some Muslims don't believe that images should be made of living things and others don't, for roughly the reasons that you give. Doesn't answer the question about TV though.