I wasn't a great fan of the first one. But I went to see this with a friend who is a bit of a history buff, which might not have helped. 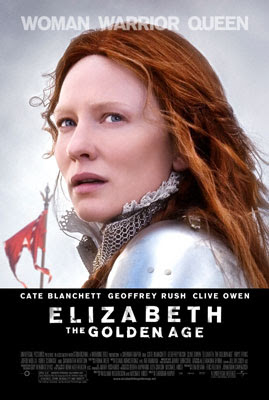 It's hard to know where to start with the annoying bits. The film is basically 1585-1589, but the main event isn't the execution of Mary, Queen of Scots, or even the Spanish Armada. The main feature of the film is a heavily fictionalised love triangle between Elizabeth, her lady in waiting and Sir Walter Raleigh (who did marry the lady in waiting in real life). Gone is Elizabeth's "I may have the body of a weak and feeble woman..." speech. Gone is most of the Spanish Armada being destroyed by storms, though the storms do play a role - in fact the Spanish Armada itself only seems to be tacked onto the end of the film.

They did seem to get most of the Mary, Queen of Scots storyline right though, which is something. Except that the execution seemed much more dignified than the historical accounts suggest - there was more mockery and mistreatment, and it took more than one blow from the axe to kill her...

If you want a trashy love triangle film, with random bits of history thrown in, this is a good bet. If you want something that helps you understand the past better, this probably isn't.