One of the bizarre things about ratings is that violence or sex in animation doesn't attract the same ratings that it does if non-animated (with, I think, the exception of displaying genitals). The problems with this get greater and greater as animation gets better and better, as is hugely obvious in Beowulf. 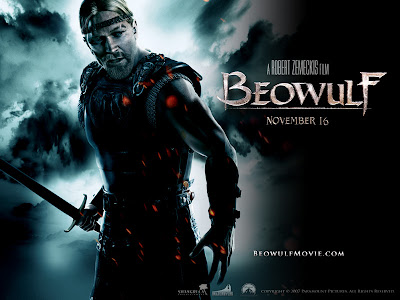 How was this (12A) less gory or sexual than Apocalypto (18)? In my opinion, it was significantly more gory and more sexual. In Apocalypto, they don't show hearts being ripped out, only the before and after, but in Beowulf they do. There's blood splattered everywhere, people ripped in two, lots of corpses, far more nudity than in Apocalypto, etc. And the animation is so good that a lot of the time you can't tell that it is animation.

Having said that, the animation is still far from perfect when it comes to living bits of living things - I suspect they're only using a single layer technique for human skin for example, which needs multi-layer treatment to get it right, and the eyes aren't great either. Ditto with the horses, which didn't seem to run quite right, rats, etc.

The story is a retelling and a reworking of the Anglo-Saxon epic of the same name. It says something that every other retelling of the story got an R rating in the US, but this one sexed it up a lot, literally, and got a PG-13. It's basically a hero-kills-monsters type story, but with a significant twist, which is a change from the epic poem, and certainly makes a lot of characters a lot more ambiguous. As such stories go, it's done pretty well. Good if you like that sort of thing...

Some great questions that can come out of this about the nature of sin, why we give into it, the effects, etc. Christianity Today's review is good on that front.