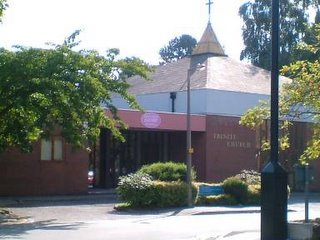 on the edge of Massie St car park, Cheadle

nothing unusual advertised, but the chap I spoke to at the end said it wasn't at all like the normal one, and normally they did something much more like a traditional Anglican morning prayer.

Nothing beforehand, but a mature gentleman came over to speak to me at the end in a friendly way.

Good accessible space (we have been known to borrow it for some functions!) Building would seat over 100, there were about 50 there. The median age was probably over 60. The service was opened by a mature gentleman speaking inaudibly and almost unintelligibly, then a middle-aged lady took over for the rest of the service.

None!!! The theme of the service was "the five senses" and there were waffly/meditative bits aout using our senses for God throughout the service. They were ok-ish, but no real challenge or use of the Bible.

This doesn't strike me as a church that's especially likely to grow without major changes, and probably not of the kind that I saw.