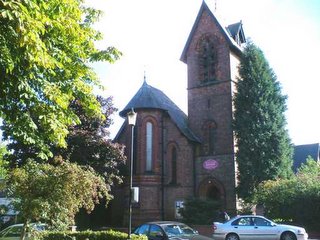 A few people smiled at me as I came in. I didn't quite make it to the end of the service. There was a bit of talking beforehand, but not to me.

The building seemed to have too many pews in - too little leg room for most of the people there. I sat on one of the few pews with decent legroom - back corner, as usual. I guess there were a few over 50 people there, mostly but not all older. Oddly, very few people sat next to each other - most were lined up along the central aisle.

Communion, as usual, except that it was a special service with the Sunday School in (which seemed to consist of three children at the front). They had apparently been working through "the Eucharist" in their lessons for a few weeks, and were in to see how it was done. This meant the vicar (leading) kept explaining what was being done. In general, I found his reasons to be good ones, but not for doing what they did. For example, he said that the reason they processed in was to show they were coming from among the congregation. IMHO, the best way to accomplish that is to have the people sitting in with the congregation, then have them go up to the front, and to do so without silly clothes. The processing, to my mind, gave the opposite impression to what he claimed its purpose to be. That all made it feel a bit like a post facto justification for what was being done. Oh, and I'd have been content with a "we do it this way because we've always done it this way" explanation, even if I'd have differed over the practice.

A female lay reader was speaking. The first few minutes were ok and connected to the passage. She then wandered off, via considering issues of euthanasia to talk about how all ethics were relative except doing what was most loving to other people. Can't say I agreed...

I've been to higher Anglo-Catholic churches, and been fine with them. But something here made me feel increasingly uncomfortable as the service went on - I can't put my finger on it, but it got so much that I eventually walked out during the administration of communion.

none that I could find

I wish I could work out what it was that made me feel especially uncomfortable. Even without that though, this is a church I'd find it very difficult to be at home in.