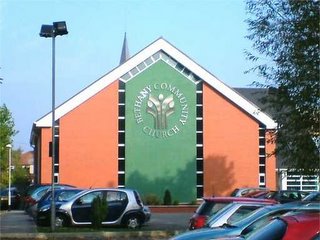 "Family Service", but the "family" aspect of it seemed to be a few games for primary kids in the middle, with nothing for everyone else to do at the same time.

Quite friendly. Several people came over to talk both before and after the service and I was asked to stay afterwards for coffee and birthday cake.

New building (2002), very nice with comfy seats and what seems to be a church hall being built. Seating capacity over 160. About 50 people there at 1030, I guess a maximum of 70 during the service. There was a fair mix of ages, with more Afro-Carribbeans than I'm aware of in the community and a clear female majority. Two seemingly interchangeable middle-aged women up front during the service. There were some teenagers on the row in front of me, who kept going on about the church being great afterwards, but didn't actually seem enthusiastic about anything in the service.

Band with singers, mostly modern emotional-type stuff. Congregational singing was ok. There were some enthusiastic people at the front with waving flags, hands in the air, etc, but the others seemed a bit more subdued.

not entirely sure there was one. There were several bits of speaking, none really attempting to explain the Bible. The Bible wasn't actually opened until 1120 (Parable of the Lost Son, but the main thing that was done with it was "imagining what happened next") and the service ended by 11:40. The theme of the service was "taking the next step".

not that I could find

Friendly, and great welcome, but the service was like eating a pillow - bland, fairly uniform consistency, but I don't think I actually got anything out of it.