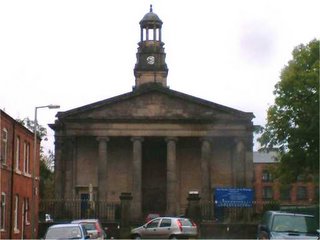 Between the A6 and Upper Hillgate, roughly level with Stockport College

Friendly. People came up to me beforehand and afterwards to talk and made an effort to shake my hand at the Peace. Was offered tea at the end, and a lift...

From the outside, the building looks quite forbidding. Inside it's an attractive Georgian neo-classical building, though the bits that aren't easily reachable are very much in need of redecoration. The building could probably seat 400 or 500 - there's a large balcony all the way round. There were under 50 there. Oh that God would send revival!

Oddly, the people there were very much split into two groups. The congregation mostly sat right at the back. Because of the balcony, there's a kind of walled stage at the front, where the choir, servers and minister sat, all robed. The choir were facing each other, and everything involved people from the stage doing stuff on the stage. Even the gospel procession stayed on the stage, and the opening procession didn't go through the congregation. I guess this created very much the feeling of a show. Most of the congregation were retired.

Sung Eucharist, sung to the "Hillgate Setting", which seemed too hard for anyone except the choir. One of the readings was from the Apocrypha, complete with "this is the Word of the Lord" at the end.

Speaking on the Parable of the Ten Virgins from Matthew. Spent the first few minutes doing some interesting-ish though not especially connected general thoughts, then explaining that the "day and hour" referred to Jesus' crucifixion and the parable wasn't about judgement at all, which seems odd in the context...

not that I could find

Another church which, sadly, will probably die soon if it doesn't change. Looking at the great building and the potential, it is a real spur to pray for God to act to change us as a church and to change the nation.