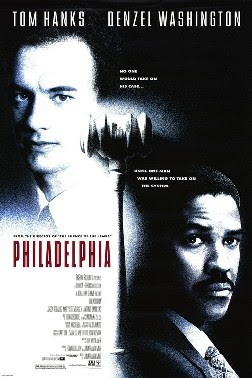 This film came out when I was 15. It doesn't seem like half a lifetime ago, but I guess it was. I bought it ridiculously cheap on DVD at the supermarket...

Basic plot for those who haven't seen it - a gay lawyer with AIDS (Tom Hanks) gets sacked by his law firm and sues them for discrimination. It won Oscars for best actor and best song - the soundtrack is awesome, if only for the combination of Bruce Springsteen and Callas singing Puccini in the most powerful scene in the film. Great film.

It's amazing how dated the film seems though. There's widespread acceptance of anti-gay prejudice in a way that just seems incredibly out of place now. The way I remember it, the film was important in changing my views on homosexual discrimination - I guess that was part of the point.

I'm not talking about a discussion of whether homosexual practice should be legal - I think there's approximately zero chance of changing people's minds on that and it's not an argument worth having. For my part, I think it's a sin in much the same way that envy or gossip or sex outside marriage is, and we're all sinners, and that means we have absolutely no excuse to treat other people worse because they are sinners too. And I don't think that people who are persistent and unrepentant gossips should be church leaders either.

So why weren't we fighting for justice then? And why do we tolerate homophobia in the evangelical church now? (it's most definitely there...) And what are we messing up today in the same way we messed up our attitude to gay people then?

I think people have a tendency to confuse the idea that homosexual practice is sinful (which I believe is biblical) with homophobia, or discrimination against homosexuals (which is not biblical at all). The problem is that some Christians have been much more vocal about their opposition to homosexuality than they have been about other more pervasive (and "traditional") sins, such as (ironically) judging others. Many have also turned this into an argument about whether or not people choose to be gay, which has only exacerbated the problem. They are angered with homosexuality, the (largely genetic) condition, instead of homosexual practice, the sin. (To put this in perspective, imagine arguing whether people are born angry or selfish.) We are, after all, born with our sinful natures, including many sexual desires that are sinful. This confusion has made homophobia much more acceptable among conservative Christian churches. But considering the people with whom Jesus consorted and considering that Jesus said the prostitutes were entering the kingdom of heaven before the Pharisees (conservative religious people), we should be much more focused on loving the sinners than on hating the sin. On the other hand, we can't forget that homosexual practice is sinful, and we shouldn't acquiesce to the cultural morality of the day.

Quite - though the notion of orientation itself is problematic.

I don't think sexual orientation exists in the way that we usually talk about it existing. Sexual actions exist, and some people at some stages are tempted more to do some sexual actions than other sexual actions.

Great film and amen to your rather surprising post. Personally I really struggle with this phobia more than any other but I agree that the issue is no different to any other sin. There is a sexual boundary and it applies to all.

They are angered with homosexuality, the (largely genetic) condition, instead of homosexual practice, the sin.

I do not understand why either of these things should make a straight person angry.

Why should I be angry that someone has a homosexual orientation?

Why should it make me angry that two gay people choose to make a lifelong commitment to each other? (I know a number of such couples before anyone tells me that this doesn't happen.)

I can see why people might get angry at sin being permitted or committed - child molestation for example. I suppose that it might therefore be possible for people to be angry at homosexuality being permitted (though I'm not, but I'm saddened at the situation in the Church).

I think a lot of it is simply prejudice though.

What evidence do you have that homosexuality is genetic as opposed to conditioned?

Well, here's an overview of the debate:

It doesn't really matter to me whether or not it's genetic, though. I probably shouldn't have called it "largely genetic" in my previous post. I agree that the idea of orientation is rather arbitrary.

I think the reason people are angered is that any sexual practice to which people are not accustomed can be angering. People used to think of divorce and adultery as "abominations," for example. Today, pedophilia would be an example of a sexual practice people look upon with disgust.