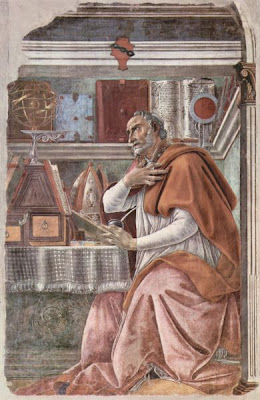 The great theologian Augustine of Hippo (c AD 400) was one of the first people to tackle the issue of the relationship of science to Christianity. Of course, "science" in the modern sense didn't exist at the time, but I'm using "science" in the loose sense of things we can know by observing the world around us.

Usually, even a non-Christian knows something about the earth, the heavens and other elements of this world, about the motion and orbit of the stars and even their sizes and relative positions, about the predictable eclipses of the sun and moon, the cycles of the years and seasons, about the kinds of animals, shrubs, stones and so forth, and this knowledge he holds to as being certain from reason and experience. Now it is a disgraceful and dangerous thing for an infidel to hear a Christian, presumably giving the meaning of Holy Scripture, talking nonsense on these topics, an we should take all means to prevent such an embarrassing situation, in which people show up vast ignorance in a Christian and laugh it to scorn. The shame is not so much that an ignorant individual is derided, but that people outside the household of the faith think our sacred writers held such opinions, and, to the great loss of those for whose salvation we toil, the writers of our Scripture are criticized and rejected as unlearned men. If they find a Christian mistaken in a field which they themselves know well and hear him maintaining foolish opinions about our books, how are they going to believe those books in matters concerning the resurrection of the dead, the hope of eternal life and the kingdom of heaven, which they think their pages are full of falsehoods on facts which they themselves have learnt from experience and the light of reason?

St Augustine of Hippo, The Literal Meaning of Genesis

Ernan McMullin summarises Augustine's view on the relationship between science and religion as follows:

So what are your views on creationism these days? And also, where does resurrection from the dead fit in with the first two points?

Creation / evolution - I don't think I've changed much since I wrote this.

Resurrection from the dead isn't really a question of science. Science tells us that people do not come back from the dead after three days and give the impression of having beaten death once and for all. But that isn't what the Bible claims. The Bible claims that in one specific case Jesus did.

Were that how things normally work, it would not be remarkable.

Science works by observing regularities. The point of the Resurrection is that it is irregular. The fact that God breaks the laws of science shows that he is beyond them. Science is right to claim that people do not rise from the dead.

Science is right to claim that people do not rise from the dead.

If that is the case, why can science not make the next (very small) step of the argument: 'people cannot rise from the dead'? The whole reason science works is based on the premise that the regularities it observes reveal fundamental truths.

Ok - I missed out an "in the normal course of things", but thought the meaning was clear enough to cope without.

But surely it makes the scientific point false? If I say, 'people do not rise from the dead', and then someone does, that means I am wrong.

BCG, the scientific point needn't be false, just incomplete in the same way that f=ma is an incomplete description of mechanics, but perfectly usable for anything that's not absolutely huge or utterly tiny.

We could always refine it to "In the natural course of events, barring special intervention by God, people do not rise from the dead" but that wouldn't be as short and sweet.

By the rules of the box we're in, people don't rise from the dead. Science describes what goes on inside the box. A truly open mind, however, will leave the option open for there to be something outside the box.