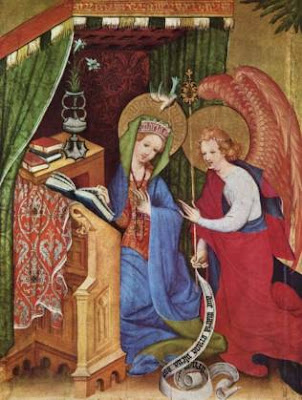 One of the things that has quite surprised me in getting to know people is the number of women with huge princess fascination complex things. I'd quite like to try to figure out why it happens - I think it's a wanting to feel valued and beautiful thing, but there's got to be more to it in some of the extreme cases I know.

One of my best friends here at college has a young daughter who is fascinated with princesses too (so it's not just 20 somethings). And he wisely tells her that she is a princess only because she is a daughter of God, the King of the Universe.

And this kind of strikes a resonance with the build-up to Christmas. In a lot of the art representing Mary, she's depicted as wearing blue. Originally, this was because that shade of blue could only be made from the semi-precious stone lapis lazuli, so it showed she was really important. In some, probably the majority in this selection, she is depicted as well-off, which she'd have to be to own blue clothes. In the picture above (the Annunciation by Conrad von Soest, 1403), she looks like a noblewoman, and that's quite common in the art of the period.

But that seems to me to be almost completely missing the point.

In the sixth month, God sent the angel Gabriel to Nazareth, a town in Galilee, to a virgin pledged to be married to a man named Joseph, a descendant of David. The virgin's name was Mary. The angel went to her and said, "Greetings, you who are highly favored! The Lord is with you."

Mary was greatly troubled at his words and wondered what kind of greeting this might be. But the angel said to her, "Do not be afraid, Mary, you have found favor with God. You will be with child and give birth to a son, and you are to give him the name Jesus. He will be great and will be called the Son of the Most High. The Lord God will give him the throne of his father David, and he will reign over the house of Jacob forever; his kingdom will never end."

All the evidence we've got points to Mary being a peasant girl. She's from Nazareth, which was a small village in a provincial backwater. But she's clearly a peasant girl who is really devoted to God, as seen from her response "May it be to me as you have said". She is a peasant girl, yet she is to become the mother of the King of Kings because she has found favour with God.

Mary is not a princess. She doesn't even come close. Except that she's a daughter of the Most High God. If you have to compare this to a fairy story, it's much more like Cinderella (with the very major difference that it's true) - God comes and takes a peasant girl and makes her the mother of his King.

It's scandalous really. And it's meant to be. And it shows that God gives hope and brings light not to the princesses of this world, but to the poor who seek him. As Mary's response shows, that's what God's always done.