I'm holding off the weightier matters of the trip for a bit - I want more time to reflect and get experience on some of them before writing much. Instead, I'd like to discuss a subject very close to my heart - food and drink.

An awful lot of the differences between food and drink in the UK and in Brazil are down to climate. For example, I've been here nearly a week, and I don't think the temperature has dropped below 20C, day or night.

So I haven't yet come across anywhere that has two taps for water. There isn't much point having an extra water heater if it's at 25C normally. And water at 25C stays fresh for only a very short time - bacteria breed like crazy. As a result, tap water in Brazil is pretty much undrinkable - in many areas it's dangerous, and in the big towns it's often chlorinated to nearly the level of swimming pools in the UK.

Milk, too, is off. And if it isn't, it goes off very quickly. I haven't yet seen anywhere that sells fresh milk here. Instead, milk comes in three main varieties - UHT, powdered and condensed. Because of that, cereal is unusual for breakfast, and not many people drink tea. It saddens me to think that people think the English drink vast quantities of a beverage which here is generally made with UHT milk.

Missing, too, are lots of standard English / European vegetables, which tend to prefer a somewhat cooler climate. But in their place are large quantities of all sorts of different fruits, some of which I've heard of and some of which I haven't. Passion fruit is popular, as are oranges, bananas, melons, pineapples, lots of sorts of berries, and so on. Some are really nice. Some are absolutely disgusting. I tried some tamarind juice today, and I'd feel guilty pouring something that horrible on my plants, in case it killed them.

The fruit doesn't seem to go off easily - I've had bananas which have looked really bruised, and in the UK would be a kind of mush, but which were absolutely fine on the inside and which taste much better than the usual ones we get in the UK. I dread to think what they do to bananas before they reach British shops... 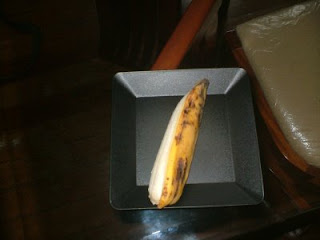 Another huge difference is the sugar. Sugar is easy to grow in Brazil, and they eat vast quantities of it. Fruit juice, as bought in the supermarket, is usually pre-sweetened. Brazillian coffee is often served with shovelfuls of sugar and a small amount of coffee. It is quite normal to have bottles of artificial sweetener liquid on the table at meals. People look oddly at me for drinking unsweetened juice. Buffets seem to consist largely of fruit and cake, and it's quite normal to eat very sugary things for breakfast, even among adults. I've been brushing my teeth quite a lot...

This has knock-on effects even as far as pizza. Among favourite pizza toppings here (without tomato, of course) are banana & brown sugar, which was ok, and chocolate (yes, chocolate pizza), which was a little OTT even for my liking. 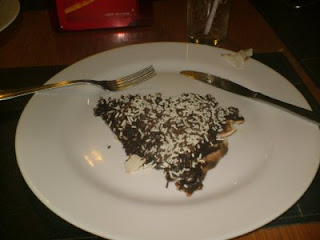 Interesting. Maybe the fresh milk thing is a cultural thing though (maybe because traditionally lots of people haven't been able to store it coolly in their houses?) - it's just as hot here in California, but there's plenty of fresh milk about... although very little tea drinking.

One strange thing I've noticed here is that most diner-type eating-out places have boxes of trivial pursuit questions on the table.. that quite a few people spend their meals out testing each other on... :s

I think the fresh milk thing might also be down to some important differences. Apparently this is the middle of a cold winter (it might even be below 20C today) - the summer gets quite a bit warmer, though probably not much warmer than yours.

And you're in one of the richest and most developed countries on Earth. I'm in a country where despite a tropical climate, only the very rich can afford air conditioning in their houses, and where large potholes on major roads are the norm. I don't think I've seen a refrigerated lorry here, for example.

Ok... so what is the sprinkling on the chocolate pizza? Cheese?
Chocolate pizza I can just about understand I think, if it's simply chocolate on a pizza base (I can imagine that being a hit here too!), but if that is cheese that is not cool...

No - the sprinkling on this one is white and brown hundreds and thousands (if you remember them...)

There was also a chocolate pizza with soft cheese on.

The sprinkling on the chocolate pizza is coconut!