Brazillians are of course very competitive, especially when it comes to sports such as football and volleyball. Even teenage girls often seem to be keen and good players, though there are still a fair number of adults of both genders who aren't especially interested. I'd guess a higher proportion of Brazillian men aren't into football than of Mancunain men! 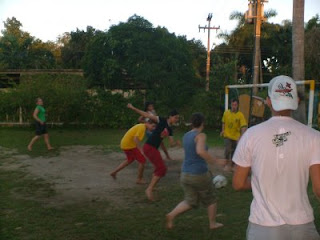 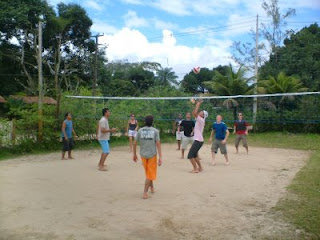 This competitiveness extends to all sorts of things - silly games, English competitions, etc, and doesn't seem to give up easily. For example, on English camp, one of the main afternoon activities was a kind of team competition at English, with spelling, anagrams, etc. The teams were all keen, even the ones with no realistic chance of winning three days in, which I don't think would happen in England.

In church, there seems to be competition for size of churches - it's one of the most common questions, and large churches are generally better regarded than small ones. (I'm reporting this, not agreeing with it.)

There's a lot of that sort of thing going on with status and money too (of which more later).

But there are some areas it doesn't seem to affect - food, for example (more on experiences of eating out in Brazil later), or cleanliness (or maybe that's just the people who were meant to be doing the cleaning on the English camp - we'd not have taken them as leaders on the camp I do in the UK...) I guess what I'm trying to say is that there doesn't really seem to be a conception of excellence apart from a conception of competition. People aren't driven to excel for the sake of excelling. Or that is how it seems to me, anyway.