My host (and some of his family) very kindly took me to see a football game the other day. It was Santa Cruz v Campinese in the Brazillian 3rd division. Tickets, by the way, cost about £10 for a good seat, or about £2 for a standing place.

Santa Cruz seem to be a lot like Manchester United, except without the money and Sir Alec. In other words, they used to be successful, but have dropped two divisions in the last two years and are most notable for having the largest stadium in this bit of Brazil (though some of it is being refurbished, and other bits are closed due to having been trashed) and for being very nasty to opponents, often using Hell-type imagery. 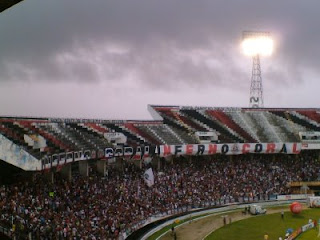 This is the so-called "Inferno Coral", where the hardest-core fans stand. Note that in Portuguese, "Inferno" means "Hell". Lots of songs about doing nasty things to their opponents... Lots of drums, jumping, and waving big flags too. At times the whole area looked like a living organism, because everyone was jumping to the beat of the drums. 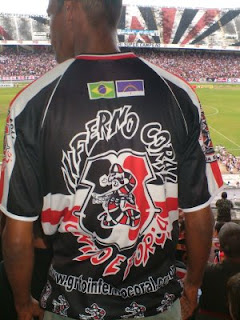 This is the top worn by many in the Inferno Coral. Note the loving attitude it displays to his fellow man. The snake, by the way, is the emblem of the club, but it doesnt't usually carry guns. Note how incongruous the state flag (at the top, with the cross and the rainbow) looks, just like Christians wearing a Man Utd shirt...

Lots of food and drink was available, some of the more conventional kind (crisps, popcorn, etc.) and some of the less conventional kind. This, for example, is raw sugar cane, which is meant to be sucked on, then spat out. Given the local industries, maybe eating so much sugar is simply a patriotic thing... 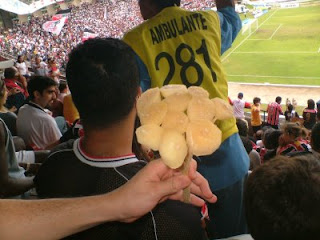 At half time, the score being 0-0, the players and officials went off. Please note the following security features: 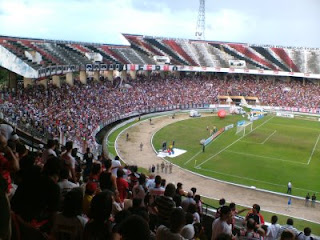 After the break, Campinese scored with a free-kick. 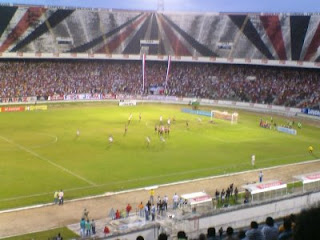 But shortly afterwards, Santa Cruz were awarded a penalty. Full marks to the penalty taker for being cheeky. He stopped most of the way into his run-up, pointed something out to the goalie, then kicked the ball into the net while the goalie was distracted. The crowd went wild. 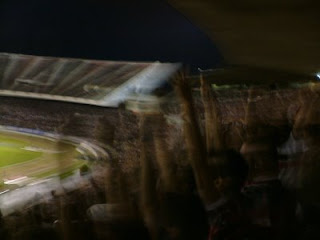 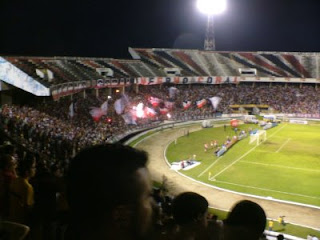 One of the good things about being in a different culture is that it gives me a good opportunity to reflect on my own. This was a regular Brazillian third division match, and they treated it like a cup final. Here, football often seems so clearly to be a matter of worship. And that got me thinking about England...

Is the reason that there are so many more women than men in church in England (and in Brazil) linked to the fact that so many men worship sports?

What does it mean to support a football team? If Liverpool and Man Utd swapped 60% of their players over a period of a few years, why would I still support Liverpool? Is it because what is actually happening is worship (however half-hearted) for something underlying what actually goes on on the pitch?

Has sport provided us with a new pantheon of gods to worship, except where there is continually more information to process so that people don't get bored?

I can see that it can be right and good to enjoy watching people use the skills God has given them. But if supporting a football team is fundamentally about worshipping a non-physical entity, can a Christian consistently do it?

I know there's various reasons why people support the teams they do - attachment to roots, glory seeking, and so on. But they all seem like bad reasons to me.

Why do people not see (a la Isaiah 44) that football is something people invented, and therefore it cannot be worthy of our devotion?

Why is it that the people at the top of the game (players, managers, etc) don't seem to show anywhere near the level of support or loyalty that the fans do? Answer - because they know it isn't worth it. For them it's a business - a way of making money.

Hopefully, it's kind of obvious I'm still wrestling with this question. Just to show how inconsistent I am, here's a photo of me with the European Champions' League Trophy... 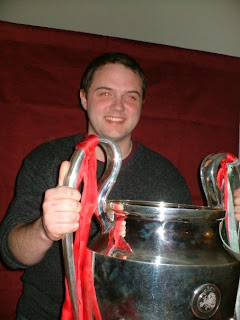 And here's a good cartoon from Dave Walker on the subject.