A couple of thing I didn't know about Lisbon before coming here that weren't exactly prominent in he guide book were the near-replica of the Golden Gate Bridge and the giant statue of Jesus. 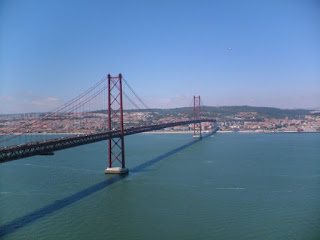 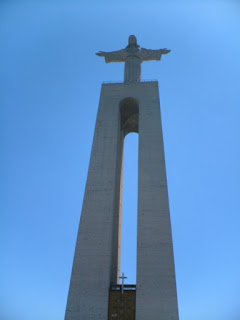 To give you an idea of the scale o the statue, look carefully at the next picture. You see that little black thing at the bottom of the base? That's a normal-sized door. 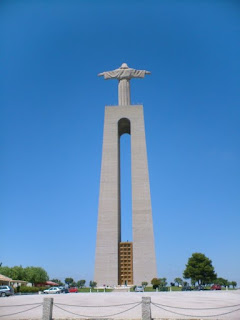 Christo Rei, the statue, was built by the Roman Catholic Church in part to thank God (or, as they put it, Christ of the Sacred Heart) for Portugal not getting drawn into WW2, and partly as a way of saying that Christ would be exalted over Portugal. Some people would doubtless say it was a bit of a waste of money, and that the money could have been given to the poor instead or something.

I suspect Jesus migth reply with something like Matthew 26:10

Aware of this, Jesus said to them, "Why are you bothering this woman? She has done a beautiful thing to me."

I'm not sure whether I ever approve of statues of Jesus theologically. I certainly don't like little ones. But 110m high ones, even if a lot of that is the plinth, certainly have something going for them.

I was going to comment when I saw your photos that one of them looked as if you had actually been coming to visit me! I guess they liked the first Golden Gate Bridge so much they felt like making a similar one.
Looks like a beautiful city though.

Look forward to hearing about the next stage in your adventure.