I'm in a bit of a silly mood, having just bought quarter of a watermelon for about 30p. Apologies for any offence caused...

Because of the big differences in pronunciation between English and Portuguese, some interesting misunderstandings are possible. For example, the lady on the plane who didn't speak English tried explaining, with the help of my phrase book that she was constipated. It turns out she meant that she had a blocked nose.

For some reason, I found this announcement on the plane worth recording. It was part of the safety announcement, and speaking about oxygen masks.

Should there be a lack of pleasure, they will immediately fall out.

Still sillier, however, was the Condomiser (TM) - not its real name. TAP (Air Portugal) said that as much security as possible was needed for flying to Brazil, and that they offered a special sealing facility for bags. On seeing this, I thought it too much fun not to use. I was then disappointed, after having my bag so sealed, to find that it cost 5 Euros. So I therefore share some knowledge of the process in order to try to recover some value for money. The bag is wrapped in plastic sheeting, which is sellotaped and then heated for a short time to cause it to melt together. It might have been this that caused some mess on the inside of my bag when my shampoo burst. Or it may not. The final effect is not dissimilar to that which might be produced by enclosing the bag in some kind of giant latex prophylactic device. 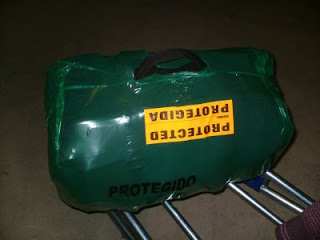 Opportunities for innuendo abound. I had to reword what I wrote above to remove some of the more notable examples. Of course, the Brazillian baggage handlers were far more efficient than those in Lisbon (baggage started arriving 40 mins after the advertised time) and probably vastly more efficient than those at Heathrow. They even had the wonderful innovation of a glass window in the baggage collection area so we could see them at work unloading the plane, driving their buggies and putting the bags onto the belt. Imagine if they did that at Heathrow, via CCTV or something. Would it dramatically cut waiting times and baggage loss? Quite possibly.

They have one of those windows at Oakland airport in California... unfortunately it's a fair distance from the baggage reclaim place. We watched them for a couple of minutes, and immediately wondered whether they knew about the window at all.. they were certainly not being gentle or particularly efficient with the bags...