A Good Bit of Ceremony

Last night I had the immense privilege of going to the Easter Vigil service at the local cathedral. 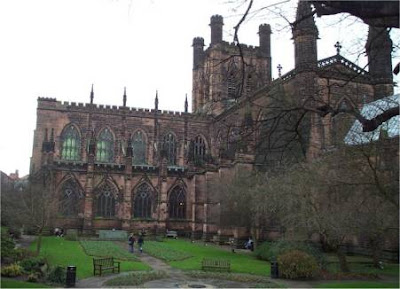 I really enjoyed it - it was a great service. Lots of incense and robes and powerful liturgy and a sermon that taught Scriptural truths well, and at the heart of it all the great affirmation that Christ is Risen! (He is risen indeed, Hallelujah!)

And the fact I thought it was such a good service got me thinking again about the role of ceremony and so on. Normally, I prefer a fairly light liturgy; none of the churches I usually frequent uses robes very often, and I think if we have that sort of thing every week it is easy to get distracted from Jesus and from being forced to confront the truth for oneself by the ceremony. But ceremony can work very well on occasion, particularly when done on special occasions.

It's easy for evangelicals to reject all the ceremony, but we often overargue our case and end up seeming to say that the physical world doesn't matter and all that matters is feeding brains in jars with more information about God. (I'm a conservative evangelical - I'm allowed to say things like that about conservative evangelicals). But it isn't. We're human beings, with bodies and senses and minds that are not as rational as modernism likes to think they are.

So time for an Easter quote from Richard Hooker:

The end which is aimed at in setting down the outward form of all religious actions is the edification of the church. Now men are edified when either their understanding is taught somewhat whereof in such actions it behoveth all men to consider or when their hearts are moved with any affection suitable thereunto; when their minds are in any sort stirred up unto that reverence, devotion, attention and due regard which in those cases seemeth requisite. Because therefore unto this purpose not only speech but also sundry sensible means besides have always been thought necessary and especially those means which being object to the eye, the liveliest and most apprehensive sense of all other, have in that respect seemed the fittest to make a deep and a strong impression...

I was just about to go "incense, robes, coo-er" when I remembered how very seriously I take church flowers, particularly for Easter. This year for Good Friday I cut seven long spires of omeiensis pteracantha, a species rose which has huge, vicious red thorns, and then I put three Ilena (white) roses in an uneven triangle in front, and to me it represented the suffering and saving trinity. So I'm not as unceremonial as I might like to think.

Te aroha o to tatou Atua ki a tatou katoa. Happy Easter to you and your family.

I think sometimes there is an element of having thrown the baby out with the bathwater. No, we shouldn't be tied to ceremony, nor think that it somehow better validates our approach to worship. But it can be a tremendous aid to enabling us to enter into worship with the right mindfulness. Some of the Easter liturgies in particular involve us as total human beings - not just creatures who hear and think, but those who taste, feel, smell and touch too.

Our Easter Vigil contained a long Liturgy of the Word during which time there were no lights at all save for individual candles each member of the congreagtion had been given. When we finaly reached the Gloria, all the lights were switched on, and the altar servers went nuts ringing every handbell that could be found. Christ is risen indeed!