C.S. Lewis - Till We Have Faces 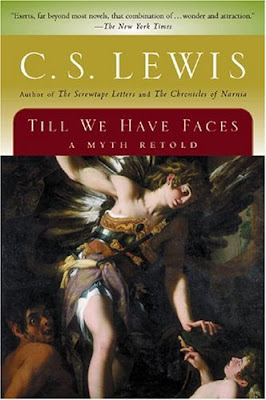 C.S. Lewis has written a lot of books. Until recently, the only fictional books I was aware of that he had written were the Narnia series and the science fiction trilogy. Since then I've read The Pilgrim's Regress, which I didn't especially get on with. But a few weeks ago, my girlfriend recommended Till We Have Faces. And I have to say that it is magnificent. As adult fiction goes, it's the best of Lewis's I've read. As Christian fiction goes, it's among the very best ever written. As fiction generally goes, it's superb. There's better psychological insights here than in almost anything else I've read.

The story is a reworking (and improvement) on the classical myth of Cupid and Psyche, set in a barbarian land with distant influences from Ancient Greece. As in the myth, a king has three daughters, the youngest of whom is amazingly beautiful, but gets demanded by the goddess of beauty as a sacrifice to her son. Part one of the book is the retelling of the (improved) story, from the point of view of the ugly eldest sister, who is seen very unsympathetically in the original myth - this whole story being presented as a complaint against the gods. At the end of the first part, I thought it was a very good book. But part two blew me away.

Do you think we mortals will find you gods easier to bear if you're beautiful? I tell you that if that's true we'll find you a thousand times worse. For then (I know what beauty does) you'll lure and entice. You'll leave us nothing, nothing that's worth our keeping or your taking. Those we love best - whoever's most worth loving - those are the very ones you'll pick out. Oh, I can see it happening, age after age, and growing worse and worse the more you reveal your beauty; the son turning his back on the mother and the bride on her groom, stolen away by this everlasting calling, calling, calling of the gods. Taken where we can't follow. It would be far better for us if you were foul and ravening. We'd rather you drank their blood than stole their hearts. We'd rather they were ours and dead than yours and made immortal.

I totally adore CS Lewis as a writer. His books are so profound and intelligent. I especially love the Chronicles of Narnia and their Biblical elements.
In fact, Disney and Walden are coming up with the latest Narnia movie-Prince Caspian, this May 16th. It promises to be awesome by the looks of the trailer. You can catch the trailer here- http://www.disney.in/narnia
I'm sure all CS Lewis lovers will not miss the movie for anything on earth!!

I love C.S.Lewis' writings. He had a flair and a lot of creativity. He had such a brilliant imagination even half a century ago!
I have read the entire series of the chronicles of narnia! I just loved it completely.
The best part is that there's a movie being made on Prince Caspian which is the fourth book in the series. It's scheduled to release on the 16th of May,2008. Can't wait to watch that.