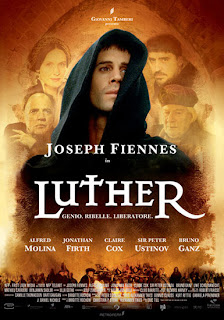 This is a film about the life of Martin Luther, roughly from 1505 (when he decided to become a monk) to 1530 (Augsburg Confession).

As a retelling of the story, it gets the main details right, but often skips over stuff. I guess it's over 2 hours as it is though, so probably couldn't have had more detailed scenes in the disputations, for example. I'd have been happy watching a 4 hour version, but some people might not.

Some of the details did annoy me though. Had they researched Luther's preaching / lecturing style, or did they just make it look modern? How could Luther cite the Bible with verse references when they weren't invented until the middle of the century? Had Melanchthon actually taken his name as early as it is used of him here? (he was born Philipp Schwartzerd).

But for a basic biographical introduction to Luther, it was pretty good. And it's a moving story. It's a real shame it didn't seem to be released at the cinema in the UK, and it's not available in most DVD shops.