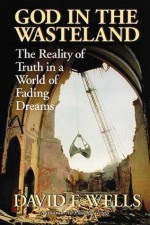 An interesting read, and one which got me thinking. Wells is at his best as a critic of culture, though sometimes he comes across as an old man who just prefers his way of doing things. He is, however, very good at turning a phrase, as is evident in the subtitle of the book - "The Reality of Truth in a World of Fading Dreams". I've put some more quotes from him here.

I've discussed the main theme of the book here (marketing the church), and spun off it in a direction which Wells hinted at but doesn't seem to have followed much here (are we all liberals now?).

He never really gets to the level of Schaeffer in providing a really big picture or in terms of getting doxological. Having said that, he is good as a cultural critic, and he does seem to get to the root of issues, but what he doesn't seem to do is dig around that root and see that actually there are good bits, and there are ways in which he is affected by the bad bits that he hadn't spotted. I think Wells's real value though is as a flagwaver - alerting people that something is up.

One of the things which makes him very good at that is his phrasing. Here are some more great quotes.

... our unflagging preoccupation with psychological wholeness as a substitute for holiness...

I suspect Wells would not like being cut up into soundbites, but I think the genre of soundbites, despite its many weaknesses, has some excellent qualities.

It is the conceit of modernity that the past is nothing more than a dead weight, that constant innovation is the only key to a better life and richer truth... And we persist in this delusion despite the fact that the lives of us moderns... are everywhere characterised by emptiness, superficiality, banality and destructiveness, whereas the lives of those who lived in previous ages and knew so much less than we do today were often comparatively more human, more serious, and more profound.

Or this, which I'm not sure about, but answers my questions as to why Wells is so anti-marketing...

Even when the machinery is hooked up to market specifically religious claims, it provokes little angst in postmodern quarters, for the machinery itself is perceived to render the marketed object harmless: it's just one more commodity in a crowded marketplace.

I just finished reading this book, and from a fairly objective anti-church standpoint. Not that I am qualified on this matter by any means. But I would like to point out politely, if I may, that I think you may have missed the point of the book. While I don't necessarily disagree with your assessment of Wells criticisms, I do not think that you give his points the merit they deserve. You said it got you thinking. What did it get you thinking about??

Incidentally, I'd question the existence of an "objective" standpoint, but that's incidental.

It's a while since I read the book, but I seem to recall it as being about how God is objectively true despite the changingness of culture, and hence service of him should have some qualities which do not change despite pressure from culture.

What do you think it was about?

I had been noticing for years that something in the ethos of society, something in people's demeanor, manerisms, indifference, an affinity for all things new, or change for the sake of change, and an aversion even to the point of extreme hostility, of all things past, especially values; all to the point of my utter disbelief! It amazes me how people have so easily dispensed with the past, or the history, of time proven methods of right and wrong that have advanced to the fore because they are built upon truth, and, in the competitive arena of many ideas of how things are done the bad ideas were cast out long ago! Things were done quite the same for millenia, uh, because they worked...like marriage twixt a male and female. In this setting there is a safe stable environment through the bearing and breading of children to the perpetuation of the human species, or any other species for that matter.
In todays society everything is about me, myself and I. And if it's not about me and I don't get my way I'll let everyone know how offended and hurt I am, I'll shout, kick and scream (Raging Grannies, Code Pink) in the streets, break plate glass windows (E.L.F., Black Flag) and loot the establishment, tree sit in the U.C. Berkeley Oak Grove for TWO YEARS, and, threaten and file lawsuits until I get my way... These types infiltrate the education system, media and government so children can slowly be indoctrinated with subtle twisted truths and half truths because in their youthful innocence they're unsuspecting of their sinister educators coup to uproot and overturn the underpinnings of Western (especially American) society. I would mention these observations to my fellow Christian brotherhood; sometimes after having a "close encounter of the third kind," with some counter culture upstart or withdrawn, inattentive, indifferent waiter/sales clerk. I would find my friends in utter dismay followed by an awkward moment due to the inability to formulate a disputation, cause...they just hadn't thought 'bout it that deep: the reason being that they too have been immersed in the cultural ethos.
For the longest time I found myself alone in my contentions. They were drifting by not finding a home upon the ears of my would be friends. Granted, no one likes a spoil sport, but they would have found me more pleasant had I not had to endure their complacency and the frustration of being made to feel ostracized. Then it happened! A friend placed God in the Wasteland in my hand, I read it and was made whole! Wow, here was this professor who addressed every single observation I had had and then some! No leaders that I knew, not even the pastors in my church were addressing these issues! Then David Wells had the courage to tell it, which in affect brought such encouragement to me! I'm so thankfull for Wasteland and finding out that I'm not crazy, it's crazy out there!
So I believe that Wells is right on! I'm sure of it because I've seen it wirth mine own eyeballs!