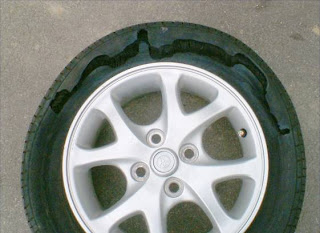 Cars are odd things. My previous car was also my first car. It was a Fiat Punto. The guidebook to used cars said that Fiat Puntos were meant to be reliable. I didn't buy that guidebook again...

The first big problem was when the oil thingy malfunctioned. Then something made a hole in the side of the cylinder block, so I had that replaced. Then the head gasket blew in the replacement. So I got a different guidebook and bought a Toyota Yaris. Everyone agrees they are reliable.

The reliability has been great so far. I got it on an approved used car thing, so it's on warranty as well. First problem I had was a slow puncture. I took it to Kwik Fit, where they told me that the dodgy tyre was significantly older than the car. Had that replaced. Today I had a tyre blow, as in properly blow while driving down the M4.

If the steering suddenly goes both light and very difficult to control at the same time, the car starts tilting to the right and there's a huge amount of noise and smoke coming from a wheel, chances are you've blown a tyre.

That makes it three times inside a year I've had to get breakdown people out. And the only previous time in my life I've needed them was in 1982.

(Photo added 8th September, 1259 to show what a tyre looks like after such an event)

Email ThisBlogThis!Share to TwitterShare to FacebookShare to Pinterest
Labels: me, rants, transport

Indeed; either fewer people read, or people just don't comment. Could be a mix of both...

Sorry about your car!

God's judgement on you for not buying a Prius. :-P

Send the old tyre to these folk and you never know, they might make you a pair of trainers! http://www.wornagain.co.uk/