This is about the phenomenon of so-called Korean prayer, which I think is a big and potentially very divisive issue. 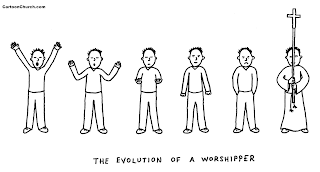 Allegedly, it started in the Assemblies of God churches in Korea. It certainly wasn't used at the presbyterian service I went to while I was there, so it's probably unfair to tarnish a whole nation because of the practices of one group. Oddly, the Assemblies of God is something I used to be pretty much convinced was some kind of cult, but now lots of people I know seem to think is perfectly respectable...

Why is it controversial?

Charismatic-y types seem to be very keen on it, yet to be completely oblivious to the fact that conservative types find it unhelpful and offensive.

This means that 'Korean' prayer leads to conservatives thinking that charismatics care more about being entertaining than they do about faithfulness to Scripture, which isn't always true by any means (though it may be in this case), and is a very unhealthy thing to think for church unity.

What is the problem with it?

On a practical and personal level, I have to concentrate so hard on not listening to what the person / people next to me are saying that I can't concentrate on saying anything of my own. Sometimes I manage to say the Gloria in Excelsis though...

On a doctrinal level, conservatives tend to argue that it's banned by 1 Corinthians 14:26-33 -

What then, brothers? When you come together, each one has a hymn, a lesson, a revelation, a tongue, or an interpretation. Let all things be done for building up. If any speak in a tongue, let there be only two or at most three, and each in turn, and let someone interpret. But if there is no one to interpret, let each of them keep silent in church and speak to himself and to God. Let two or three prophets speak, and let the others weigh what is said. If a revelation is made to another sitting there, let the first be silent. For you can all prophesy one by one, so that all may learn and all be encouraged, and the spirits of prophets are subject to prophets. For God is not a God of confusion but of peace.
1 Corinthians 14:26-33, ESV

Although it doesn't specifically address the practice of 'Korean' prayer, it does say that both speaking in tongues and prophecy should be practiced in an orderly way, with each speaking in turn, and when one person starts speaking, other people should be silent. Furthermore, it argues this from the nature of God, which makes it look awfully like it applies just as much to praying.

So why do charismatics do it?

When I ask charismatics about it, many of them haven't really thought about it. Others argue that 1 Corinthians 14 doesn't apply to praying and that the way that Korean prayer is done is orderly, which looks to me like it ignores Paul's argument from God's character, but seems to satisfy them.

And when they heard it, they lifted their voices together to God and said...
Acts 4:24, ESV

I suspect it's also because sometimes it's difficult to concentrate when it's just one person, who isn't me, praying out loud - it's a kind of entertainment thing.

I think that 'Korean' prayer probably is wrong to do in church, because it looks like it is prohibited by 1 Corinthians 14, and the arguments for it are pretty rubbish. It is especially inappropriate in a service which is aimed at building bridges between conservatives and charismatics (for example).

However, if a church wants to do it that way, no-one objects, and the leaders involved have thought and prayed through the passages, and come to the honest conclusion that it's ok, I'm not going to object.

God can hear our prayers whether we speak out loud or offer them silently. A case can be made for praying out loud one person at a time, as the listeners can "agree" (to use church speak) in their own prayer. On the other hand, with "Korean prayer" (they call it that in Japan, too), you can't hear what any one person is saying. So what's the point? It's certainly not for God's benefit.I can only conclude that it is for show.

That's hilarious. The kind of things we get up to at Wycliffe chapel eh? :0)

my korean friends and others i know find it very helpful and encouraging: lifting up your own petitions and requests to God audible while strongly aware that others are doing the same. it's seen as like communal silent prayer but with more actual praying (as opposed to getting distracted / just thinking) and more audio/visual stimulus/encouragement.

who are you praying to? if you're praying to God rather than exhorting men then it doesn't come under the disqualification of acts 14.

because it doesn't fit into your cultural norm, and you're clearly slightly uncomfortable with it, i suggest you think longer and harder about it before writing it off for the whole world to read and laugh at you. in a world-christianity context, it sounds painfully xenophobic.

sorry for the rant - i usually refrain from ranting on your blog comments when i want to, but today i will speak my mind!

I think you're trying to have your cake and eat it, whatever that means.

You say both that the vocalisation is partly for the purpose of encouraging others, and then implicitly argue that it isn't.

Praying like Hannah did is just as easy to concentrate as praying out loud (for me at least). The way my brain works, I find I can't concentrate if there's other people talking, same as I find it difficult to concentrate on saying something if there's background music with audible words.

I'm not saying that 'Korean' prayer is wrong, because that would imply a claim of inerrancy for my own interpretation - I'm saying that I think there's a good enough case against it that it's a bad idea to do it where there's people who are offended by it.

Worth also adding that in 1 Corinthians 14, there's an assumption that speaking out loud is for other people rather than between oneself and God - hence the stuff about speaking in tongues.

Even speaking in tongues is to be done in turn, with interpretation.

Hey, I've well read your opinion about Korean Prayer. (by the way I'm Korean) In my experience in Korean church, usually whoever the leader is, lets you know how are we gonna pray either silently, or loudly, or in tongue, or any other possible way. So it's not like we always pray in loud voice.

And also I think it's a cultural thing, effected Koreans to have a tendency of praying like that. Hey, Koreans were suffered for 40 years under the Japan's occupation during the World War 2. Many were killed and lost history, identity, and heart. After that Korean had to go for a long period of poor and poverty. How would someone expect Koreans pray silently, but crying out to God for deliverance under the desperation.

Hi. Thanks for the posting.
I am Korean and my Korean church always practices out-loud prayer. It seems the pastor has strong faith in out-loud prayer. I myself prefer praying quietly, I can communicate better with God that way. I don't particularly object to prayer in loud voice, but I hate my church sort of pushing people to pray in loud voice. I can’t concentrate that way. Every Sunday, the pastor asks the congregation to pray in really loud voice, but that’s certainly not for me.

I rather imagine that at least some of my objection to the practice is because I'm very bad at concentrating when there's other stuff going on in the room...

I myself like some people who have left comments am Korean. I'm a Korean teenager and I do the "Korean prayer" without anyone urging me to. How can you as a human being judge and say "it's for show"? Sure there are people who do it for show. As for my case, I can personally say praying in this way has planted my feet firmly to the ground and strengthened my faith and PASSION for God. In the most devastating situations my family and I have gathered to pray in this manner with one heart and there has not been a single time our prayers have not been heard and answered by God.

You know what... let's be honest. People do anything for show, whether it's praying out loud or even praying silently to yourself. Humans are humans, we do things to be seen by others whether it's lifting your hands up in praise or praying out loud or praying silently to yourself. But it's beyond simple minded to assume this is the case for everyone.

Whatever "style" prayer you choose to pray in, that shouldn't be your boundary... that should not CONFINE you.

I don't have a STYLE of prayer. I just PRAY the way the Spirit leads me. If I am praying for my unbelieving friends and those who are not saved, God gives me passion and I pray out loud for those souls to be saved. If I'm quietly waiting on Him, if I'm thanking him, I silently wait on Him.

I believe God has set us FREE. Times when I have relied on God completely, allowing myself to be led by the Spirit in prayer, I have not been told or urged to "quiet down" ... Prayer should come from the soul... and while i believe that our God is a gentle God, I also believe in His power and His passion and when this passion is in my heart, I can't help but pray out loud.

Our church is a Korean church and we are not confined by what you call "Korean prayer"... we have been set free through it. If God was not happy with the way we were praying, I don't see why our Church is continually growing and "catching fire".

Yes. Our God is a consuming FIRE. God called us to be hot, not lukewarm... and God has poured out His Spirit onto our church to pray with His passion, and to simply say that this is for show- you'd need to rethink that.

Shelly - I admire your faith and passion for God.

I don't in the least think that Korean prayer is done for show - sorry if you got that impression.

We're under grace not law - if you and everyone else in your fellowship finds it helpful then that's great and it's a good thing to be doing.

If I was in your fellowship, chances are I wouldn't find it helpful. But don't let that stop you!