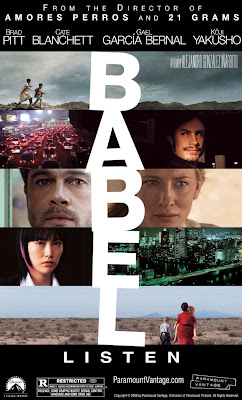 What a remarkable film...

The film follows four groups of people - a Moroccan goat farmer and his family, some tourists in Morocco, the children and nanny of two of the American tourists, and some female deaf-mute volleyball players in Japan. None of the groups meet each other during the film, and their interwoven stories are connected by one event, which is very much the pivotal event in two of them, but is only more remotely causative in the other two. All four stories are sad; all four are interesting in their own right; some find better resolutions than others. There are common themes of self-sacrifice and growing up and abandonment.

The film deserves at least its 15 rating. There's violence, including against children. There's drug taking and strong sexual references. There's full female nudity, though it's more tragic than sexual.

But if you can cope with that, this is a well-made film that really makes you think.