I don't like labels when they become an excuse for rejecting other people and their views without thinking about them, which they often are. But sometimes labels are useful because they identify certain common characteristics. For example, my background is strongly conservative evangelical, and us conservative evangelicals are just about starting to realise that we don't have to overreact against what some Roman Catholics believed in the 1500s any more. 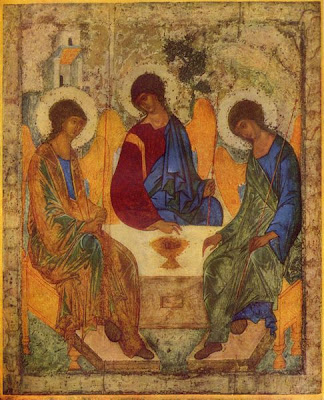 One thing that struck me when I started discussing the issue of icons with Orthodox people was that some of their justifications seemed fine. For example, it is obvious that in Christian doctrine, Jesus is God, and Jesus was visible. Therefore, if someone had taken a photo of Jesus, the result would be an accurate (but by no means exhaustive) picture of God. (It's just as well no-one did, otherwise we'd probably be worshipping the picture or anyone who looked vaguely like it.) And then you get to thinking about interesting questions such as "What does the Incarnation mean for the prohibition of images?"

You also get use of icons which seems to be quite similar to the later Western phenomenon of Christian biography - icons as a kind of devotional biography for a non-literate culture, leading to a focus on God because of the life of the saint involved.

Of course, there's plenty of unhelpful stuff associated with icons too. For example, the icon pictured is Rublev's famous icon of the Trinity. It's meant to have all kinds of deep significance. But to my (horribly uncultured) mind, its main significance is that it makes the Trinity look like three women with dodgy necks. That suggests that maybe Rublev had been reading too much Gregory of Nyssa. Gregory of Nyssa was a famous theologian and bishop in the late 300s AD, who argued that the reason his understanding of the Trinity didn't imply that there were three gods was that actually it was incorrect to say "three men" because all men had the same essence.

In other words, I am asserting that Rublev emphasises the threeness too much at the expense of the oneness of the Trinity, and that for me at least that makes it difficult to appreciate the other clever bits of significance in the icon. [It's worth adding of course that lots of people can and do find Rublev's icon helpful, but the use of imagery often introduces unwanted ambiguities, which some people then see as the main point.]

Taking the other side for a moment, consider this argument. If in your church, over on a side wall, there was a little photo of Jim Elliot, (or Luther, or Calvin) with a five line biography underneath and something saying "He is no fool who gives what he cannot keep to gain what he cannot lose", (or equivalent), with no candles or kneeling or kissing or anything, would you think that was potentially helpful? Probably, yes. Would I see anything objectionable in it? Probably not, no. Certainly as a kid, I'd have found it interesting and thought provoking.

If you accept the Jim Elliot / Luther / Calvin example, the issue over use of images isn't a black-and-white one. Instead it's a question of how best to use images in worship. How do we work with a heavily visual culture, avoiding the danger that says that God isn't concerned with the physical, yet at the same time avoid the danger of idolatry? That's a better question...

as you're really too ill-informed, and perhaps even too stupid to understand what you are talking about, don't you think it would be wiser not to post? next week, have a bash at how jane austen isn't up to much as a novelist and leonardo can't paint for toffee.

From the person who thinks he's better at theology than the author of the Epistle to the Hebrews, that's quite steep!

You're funny though. If I make demonstrable factual errors, please correct them.

everybody is better at theology that the writer of the epistle to the hebrews. and as far as your errors on this are concerned. it's too much of a job to start. you admit that you have no experience of this tradition. it is a whole world of spirituality to you and yet you presume to stand in judgement on it. god help the people in the parishes you will work in who have a depth of experience and spirituality you look as though you will never obtain, but whose view is different from yours. on the showing of this post and of your whole blog you will reject their insight and tell them where they are going wrong. i've said it before, and i say it again - you are a pompous ass.

Would you care to explain how you know the author of the Epistle to the Hebrews was wrong? (and therefore presumably also the early Church which agreed it should be in the Bible, and Paul who uses a similar line of argument in 1 Corinthians 15)?

Or point to any factual errors in my post? I'm always keen to correct those, even if the interpretation is a little subjective...

i'm afaid that your idea that because something is in the bible it is factually correct and spiritually adequate means we have too little common ground for any discussion on why the writer of the epistle to the hebrews is wrong in his entire understanding of the nature and meaning of the books of the old testament. his complete program of typology is disreputable. though this is not to demean him in any way as a person of his age, simply to reject him as having much to say to someone in our age.

Can you explain why you make the qualification about there being no candles or kneeling ? Are you opposed to candles in church generally ? Would it not be all right to kneel to pray in front of an icon of Christ ? I can see why you may not think so if the icon is of a saint.

In that paragraph, I'm setting up an example of use of images of Christians in worship that even the most iconoclastic people are likely to agree with.

My own views on the issues of candles and kneeling aren't actually relevant to this post.

Since you ask though, I'd have as many reservations kneeling in front of a picture of Jesus as I would of kissing a photo of my wife (were I married). And I probably wouldn't kiss a photo of my wife, though I understand that some might kiss photos of theirs.

On candles - I think they're useful for creating a certain sort of atmosphere...