I've recently got back from a trip to Israel / Palestine, hence the lack of blogging recently. I've got lots and lots of things to say, but it's a good idea to start with my biggest impressions of the place. 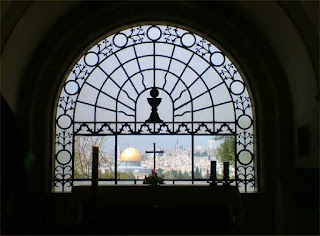 It was awesomely amazing to be able to walk where Jesus walked. We were following the book In the Steps of Jesus, largely because the author was our tour guide. The book is well worth a look if you're into that sort of thing. One of the things that I hope will really stay with me is a knowledge that I've been where Jesus was born, where he grew up, where he preached, where he died, where he was buried, where he rose again and where he left the earth to go into heaven (well, pretty near that last one).

On the other hand, it was really sad to see so much of the rubbish. The way that the Jews and Palestinians treat each other. The way that although there are great Christians on both sides and indeed working to bridge that divide, that is not always obvious from the way they go about things. The way that all too often the historic "Christian" communities in the land seem to be merely societies for the preservation of their own history in opposition to others. The way that the Greek Orthodox churches all fly Greek national flags. The fact that of all the sites we visited, only a handful actually made any effort either to explain what was going on or to tell people about Jesus.

Here's an example of that last one, from just outside the church at Gethsemane: 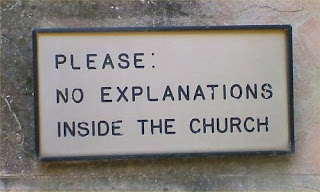