Israel 5 - The Church of the Resurrection 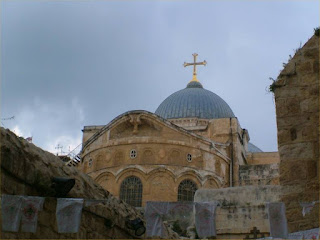 One of the ways that Christians celebrate being united in Jesus' death and resurrection there is by acting like small children. For example, inside Jesus' tomb (you can't actually see the original rock - people were too keen on souveniers and the Christians were too keen on ecclesiastical bling so it's all covered up - there is a ledge for candles. The ledge is split into three sections - one for the Greek Orthodox, one for the Roman Catholics and one for the Armenian Orthodox. That's really mature, guys.

Inside the church itself, there are areas run by the Greeks, the Romans and the Armenians. The Syrian Orthodox and the Egyptian Orthodox also use little bits of the church. After a nasty argument (or running out of money or something), the Ethiopian Orthodox were "lovingly" expelled to the roof, so they have some monks living on the roof of the church. Apparently, the Egyptians also claim the roof, and a few years ago a riot broke out after the Egyptian monk sitting on the roof (to assert ownership) moved his chair from its usual place because he wanted to sit in the shade.

The Christians there also exhibit their great maturity in other ways. For example, there is a ladder on a window ledge. It has been there for over 100 years, because they can't agree whose job it is to move it. 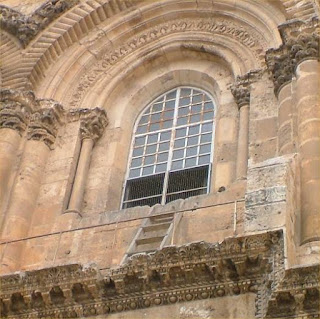 The same kind of idea applies to the building - "the edicule" round Jesus' tomb. It has seriosuly needed repairing for getting on for 100 years, but they haven't got round to it yet. Apparently, while Jerusalem was under British rule, the Brits got so fed up with the arguing that they put some big girders round the outside to hold it together. They're still there.

There was also quite a lot of damage done to the building in a big fire in the early 1800s. Bits of it still haven't been repaired, because they can't agree whose responsibility it is!

I guess one good thing about all of this silliness is that it shows us that we are still stupid sinful human beings, and we still need Jesus' death for us just as much as we did 2000 years ago.

Good to know that the church in Israel is just like the church pretty much everywhere else in the world. Many of our churches here won't use the most recent translation of the Bible because it was done in co-ordination with Catholics, and therefore has Papist cooties or something.

Christians acting like children about people-not-like-us is a universal constant, despite pretty much the whole of the New Testament letters advising otherwise.