Two comments on my blog in the last day or so have used the word "theism". At face value, "theism" means the belief that there is a God, from the Greek theos meaning God. So a-theism is the belief that there isn't a God (though actually the word "atheism" was invented first. Before people started not believing in God, there wasn't really a reason to have a word that meant "the belief that God exists". Yes, it's a bit more complex than that, and we could have a discussion about how "atheism" in Ancient Greece meant something very different from the modern version so that Christians were counted as "atheists", but that's not the point of this post.

I don't like the word "theism", because I think it implies what can sometimes be a mistake in terms of how we know things. I'll try to explain.

I guess the way that a lot of people construct their views on questions like this is as follows: 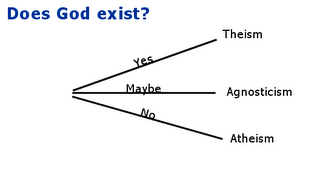 If the answer is "yes", they'd then go on to another question about number of gods, leading to monotheism, polytheism, dualism or something like that. Monotheism would then split into Christianity, Judaism, Islam, Zoroastrianism and maybe one or two others.

The reason I don't think that works is because the question "does God exist?" is the key question for atheists, but not for other groups. Buddhists, for example, regard the question as very much secondary - they are free to take any view on it.

I am not a Christian because I sat down and thought my way through a tree diagram and decided that yes, there is a God, that there's probably only one of them, etc. My Christianity is not a subset of my theism.

Another danger of taking theism as the dominiant category is that it groups very different things together as similar (e.g. Christianity and Islam) and similar things (e.g. liberal Judaism and moderate humanism) apart as different.

Was there only one God on the cross when God said 'My God, My God , why have your forsaken me?' , and when God-on-the-cross asked God-not-on-the-cross to forgive people?

Yes, there was only one God. 'forsaken' doesn't mean 'abandoned' but 'not saved', as the context of the quotation from Psalm 22:1 makes clear. Hence, Jesus was saying that God hadn't saved him from death. Jesus could have saved himself, but didn't.

The other incident to which you allude is Luke 23:34, 'Jesus said, "Father, forgive them, for they do not know what they are doing."' The word 'God' does not appear here. Jesus asked his Father to forgive his tormentors.