While I'm busy doing book reviews, I might as well mention Xenocide, by Orson Scott Card, which I read last week as a treat just after I passed my driving test. 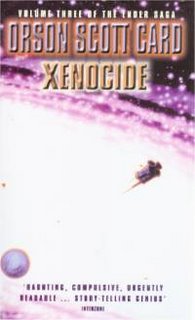 It's book 3 in one of the best sci-fi series I've ever read - the Ender Saga. I don't think I've written reviews of any of the others, so I'll quickly outline what happens.

In book 1 - Ender's Game, Earth is recovering from a devastating attack by an alien fleet, who they narrowly beat off. To make sure that it doesn't happen again, they are finding (and even genetically engineering) exceptionally talented children and training them in space tactics, warfare, etc. Ender is one of them, and this book basically goes through his childhood, especially his time in Battle School. It's pretty violent in places (read kids occasionally beating each other to death, general warfare stuff). What the book is especially good at is portraying what life is like for exceptionally bright young people (especially Ender, his gentler sister and his more ruthless brother) surrounded by less capable older people.

Book 2 - Speaker for the Dead - takes place thousands of years later (Earth time), with some of the same characters having been kept alive by virtue of being on ships travelling at nearly the speed of light (the physics of it is fine). It's mainly set on a planet where the human colonists are struggling to come to terms with a local intelligent species known as "the piggies". It's an excellent exploration of what it means to know other people and to understand other people.

Book 3 - Xenocide - is set on the same planet a few decades later. They are faced with the very real possibility that of the 4 (or indeed 5) known intelligent species, all might be killed in a forthcoming war, unless one is destroyed sooner. In writing this, Card includes one of the great discussions of what it means to be free, albeit by invoking some weird sciencey stuff. But that's allowed for SF writers, as long as they are clear what they are doing, and that they are using it to explore real issues. And OSC does that very well indeed.