Were I in the USA, a fairly normal description for what I'm doing in September would be attending seminary, which would make me a seminarian. I'm glad I'm not in the USA. For one thing, if asked how a seminarian becomes a member of a seminary, I suppose the obvious answer would be insemination, and that's not really on my list of things I want to happen to me (or indeed to do, unless I get married, which would probably be nice but for which I have no immediate plans). Besides that, I don't know what a narian is, so I wouldn't really want to be half of one. An Arian is something different, I'm not half of one of those either and I doubt it's one of those "a napron" / "an apron" things anyway.

There are three similar semantemes (which apparently means basic element of meaning in a word) here.

Semen, seminis is the Latin for "seed". Apparently seminaries were seen as "seed beds"...

Semi is the Latin for "half".

And on a non-entirely unrelated note, I got an excellent card from one of my sisters congratulating me on passing my driving test. 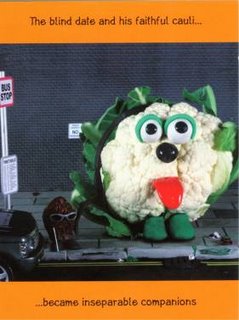 The company that did it can be found here if that's your sort of thing. I reckon that counts as "fair use" - let me know if you disagree...

Oh yes, and thank you also for the other congratulations, etc on the driving test.

that`s an odd card....or I just can`t understand it!

At a guess, Blind date, cauli and Collie will be the meanings you're missing.

The idea is that the most natural sense of the words, when read aloud, present a completely different picture to the actual picture on the card, which is nevertheless a potentially accurate pictorial representation of the words, as well as being in itself a funny situation.