I've watched a bit of action-type stuff lately. Or more accurately, I watched it a while ago and haven't had much time to write stuff up for here. 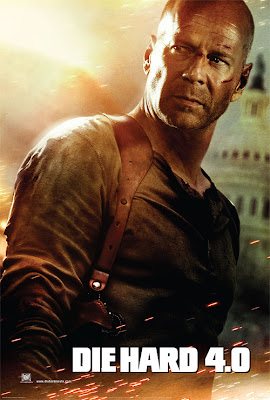 Classic Bruce Willis. Incredible action sequences, though the one where the car crashes into the helicopter just couldn't work... Basically fairly high quality spectacular escapist tosh. And the ending takes Willis's famous "shoot the hostage" tactic to another level.

Yeah, I know it's been out for ages and I must have been hiding under a rock or something to miss it, but I went for years without a TV and everything... For those who don't know, it's a real-time (with ad breaks) 24-hour TV terrorist/spy drama.

Quite simply an amazing TV series - the production values are a long way ahead of even the recent series of Spooks, which is made to look like a poor British copy. The action and suspense are very well done.

A friend of mine said "you can't watch just one episode of 24", and told me that the trick to watching them is to stop it at the slight dip in the storyline about 20 minutes into an episode rather than at the end. Good advice. There are quite a few twists - pretty much every episode ends with a twist or a major plot development, often involving death. I remember one episode where I was fairly surprised that no-one had died and it was 40 minutes in, but it didn't stay like that. Even without the plane, I suspect the body count of this series might well make it into three figures. It's that sort of show.

Lots of people apparently say that the twist at the end of series 1 doesn't make sense. It does.

Name another film where Bruce Willis 'shoots the hostage'... I think that that reference is from Speed... which would be Keanu Reeves' tactic...

good call - my memory evidently playing tricks on me...

in that case it's another example of bruce willis doing whatever it takes, however much pain he needs to go through...

It's true that Spooks now tries to cram so much in that it has become something like a (slightly) less glitzy 24 copy. I think I like the earlier series better, where it was a bit more of a gritty spy drama. I think part of the reason is that they've now exhausted all the obvious plots (racists, fundies, drug traffickers etc) so they have to construct new, ever more complex ones to avoid covering old ground. The many multiple plot lines then make it feel a bit 24ish.

I'm whispering this very quietly. Bruce Willis didn't shoot the hostage. His character may have. It's another case for "Ceci n'est pas une pipe", and perhaps another demonstration of why films which have Jesus as a character are a bad idea, ie, unconscious identification of the character with the actor.

Funny how people in their insensitivity like to be "entertained" by watching violence, mayhem and killing.

I think it's more that people like to be entertained by watching a hero.

If a film consisted only of violence, bloodshed and killing, I'd not want to watch it, and wouldn't enjoy it if I did.

But yes, I don't have a problem admitting that I, along with 90% of the male population of this island, have been hugely desensitised to screen violence.