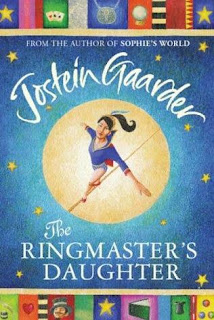 When Jostein Gaarder is at his quirky best, he is magnificent, especially when showing wonder at the world around us. Sadly, he doesn't do that much in the Ringmaster's Daughter, his quirks don't quite work, and the book is a lot poorer as a result.

The main character is a boy/man who is very bright and has an incredibly fertile imagination - he keeps thinking of stories, but doesn't have the persistence to write a novel. So he sells his work, and ends up getting caught in a trap of his own making.

The main problems here from my point of view was that the main character wasn't that believable - I can cope with magical philosophers (as in Sophie's World), but in stories meant to be set in the real world, kids don't think like that. That, the fact there is too much sex for a Gaarder novel and the fact the twist is so incredibly obvious.

This seems to be Gaarder a very long way from his best.