Being a somewhat tense area of the world, there is an awful lot of propaganda doing the rounds in Israel and Palestine. And sadly, there seem to be very very few people who seem to have fully understood both sides of the argument. We did find one Christian Palestinian guy who was nearly there and was doing excellent work with trying to get reconciliation between individual Palestinian Christians and individual Jewish Christians.

The best single bit of propaganda we came across had to be at Masada. Basically, it was a pretty much invincible fortress. It's a small mountain, a few hundred metres high (though the top is only like 50m above sea level because the bottom is near to the Dead Sea). The top 50m or so all round is essentially cliff face, and they'd built a fortress into it. 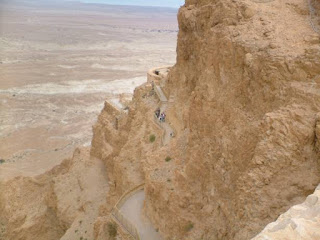 (Some of the view from the top, showing bits of the fortress and one of Herod's palaces up there. Note also how far away the background looks.)

In AD66 or so, the Jews revolted against the Roman occupation, so the Romans eventually sent an army to crush them. Masada was the last place held against the Romans, in AD73/74. The Romans, being clever, captured it by forcing expendable slaves to build a huge ramp up one side, therefore making the fortress pregnable.

The Romans brought up battering rams, broke a hole in the wall, but all the Jews committed suicide rather than fighting or being captured. (Incidentally, in a similar situation at Gamla few years earlier, one Jewish guy had been part of the suicide pact, rigged it so he was the last one to die, then handed himself over to the Romans and ended up commanding one of their armies against his own people. Nice.)

Anyhow, at the visitors' centre at the bottom of Masada, there was a video presentation about it. And given that it's kind of hard to spin "Our last few soldiers committed suicide rather than fight" in a good light, they managed to do an exceptionally good job. They had an archaeologist telling the story, but with the decision being between death and slavery. It ended up with the archaeologist saying to another guy something like "I'm really impressed that they chose death over slavery. What would you do?"

Anyway, quick outline of both sides' views, as I understand them.

Neither side (Israeli / Palestinian) really considers the other lot to be human.

Israel was set up in 1948 with stupid and indefensible borders (like having a 10m strip round one side of Lake Galilee, but there's lots of examples). Their experience suggests that they aren't going to get on well enough with their neighbours to be able to trust them with borders like that, so in 1967 they conquered big chunks of land to give them more sensible borders. Hard-line Israelis want control of all the area, but there aren't many of them. Most of them just seem to want security, which includes not having Palestinians (or anyone else) blow themselves up in wedding parties. They therefore do whatever it takes to stop those things happening. And if that means having roads that Palestinian-registered cars can't drive on and having a great big concrete wall around some Palestinian towns with checkpoints, that is what it means. It doesn't actually seem to be apartheid - Palestinians living in Israeli areas (e.g. central Jerusalem) seem to have much the same rights as other Israelis, but it's not an ideal situation.

Palestinians aren't happy about Israel controlling as much land as they do. They see themselves as owning all the lands which were conquered by Israel in 1967. So if Israel decides to build some more houses on land which the Palestinians think they own, even if they don't have deeds to the land, they get very unhappy. They are also very unhappy that when Israel built the big concrete wall, they often built it right round the edge of Palestinian areas, sometimes even through Palestinian-owned land. The hard-liners, of whom there aren't very many, want Israel wiped off the face of the Earth. The moderates want all of what they see as their land back and don't seem to see the treaty signed by Yasser Arafat which gave up some of the West Bank in return for autonomous government in the rest as binding. Though they quite like having their own government.

It gets even more complicated when it comes to Jerusalem. Both sides want to control the Temple Mount, and neither side is going to give in.

Some of my, probably very controversial thoughts: