We had two guides on the trip to Israel. One was a local Christian of Armenian ancestry. The other was a lecturer here. One of the things I really appreciated about our non-local guide was that he made it a lot easier to tell what was genuine and what wasn't. There does seem to be a strong tendancy for not-quite-genuine things in Israel and Palestine. The worst culprit was quite possibly "the tree Zacchaeus climbed". 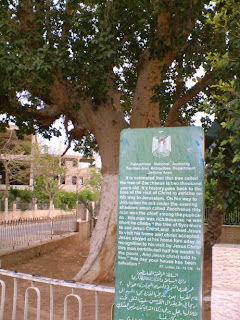 (Note the way it doesn't look anywhere near 2000 years old. I guess that's miraculous preservation or something.)

It was an interesting choice of our driver to stop by that tree in Jericho, but not to stop at the Tell (archaeological hill) containing the ruins of one of the oldest cities on Earth.

If we'd just had someone telling us "this is the tree Zacchaeus climbed", "this is the place where Jesus was crucified", we'd have had a heard time telling which ones were genuine and which ones weren't. But the honesty about the implausibility of some sites made the genuine sites more impressive.

Though another interesting take on it was which sites seemed genuine. Although the Church of the Resurrection quite probably was the original site of the crucifixion and resurrection, the Garden Tomb site was much more genuine in the sense of bearing a closer resemblence to what the original was like. Oh, and the garden was nice, even if it was a modified version of the later English gardening movement, which I read the other day was a product of the Reformation. 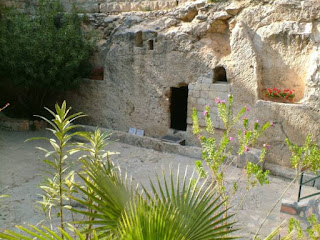 The tomb has been left in the rock-face, you can go into the ante-room and see into the burial chamber. And there's a lovely sign on the entrance saying "He is not here. He has risen."

I think the Garden Tomb was probably the best venue we visited, and one of the very few to make an effort to explain the significance of what went on.