Nick King and the New Testament

One of the books I was (very kindly) given for my birthday was the New Testament as translated by Nick King. 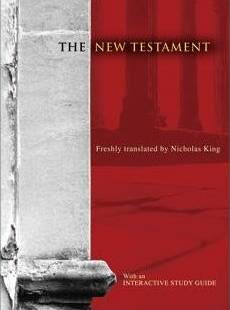 That was odd, because I know Nick King - he's a Jesuit priest who has been teaching me Greek this term. Nice guy too. His translation seems fairly good as well - I'm currently reading the gospels in Greek, ESV and Nick King's, and comparing the three. Where NK is less good English than the ESV, he's closer to the Greek. This isn't a dynamic equivalent like the NIV; this seems to be a translation of idiomatic Greek into idiomatic English with the idiom somewhere between English and Greek. And in general it works. When I want to check my translations from the Greek against an English which makes sense, this is really helpful - slightly more helpful even than the ESV.

Flicking ahead to the epistles, he seems to try to keep the sentence structure the same as in the Greek (which often has very long sentences), but he uses bullet points to keep clarity with subordinate clauses. There are a few things I'm not overly keen on - the Greek of Romans 3:22-25, for example, seems to fit much better with the ESV or NIV than with NK's. Part of me might suggest that's because he's got a commitment not to translate it in a way that disagrees with Roman Catholic doctrine, but the rest of me would assume he'd just had a hard time marking someone's work.

All in all, I'm finding it quite helpful and an interesting take on translation.