Evolution of a Blog

I realised the other day that I've had a webpage that did much the same as this one for 10 years, as of last month.

So, with that in mind, here are some of the exciting page designs I've used. 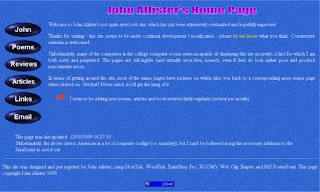 (from 1997/1998 to October 1999) This wasn't the original design - that has sadly been lost (but it was black, with text links, tables and WordArt at the top). Note the buttons over at the left that change colour when you hover over them (oooooh). The most distinctive feature of this site was that every page had the same texture background (kind of like rough paper), but in different colours, including bright magenta. A lot of them managed to be tasteful by my very limited standards, but others were truly hideous. 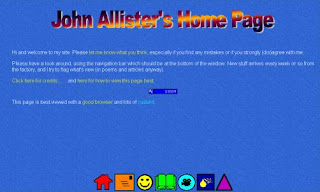 (October 1999 - January 2000) The buttons got on my nerves after a while - specifically the fact I couldn't be bothered pasting them onto every page, and they didn't look right if it was a long article, so I replaced them with a toolbar at the bottom, which didn't change colour even when the rest of the page did, because it used frames. 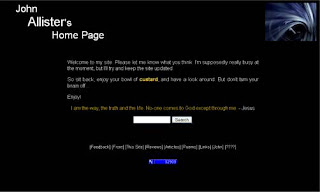 (January 2000 - 2002) This was probably my favourite design. Text-based navigation, pictures to liven it up a bit, fast, efficient, easy. But then some pupils found it, so a change was in order. This was still handcoded, but I'd written some software to do the donkey work of changing text to HTML. 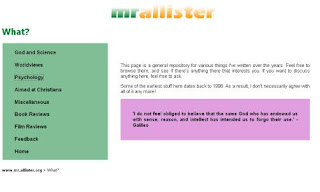 (2002-2006) This design was done almost overnight. I stopped posting much to it fairly quickly, and ended up disabling large chunks of the website after abuse by pupils, and found another outlet for my writing. 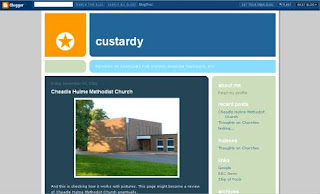 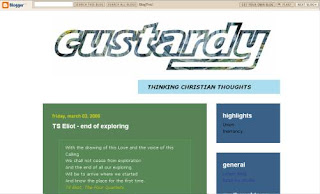 Trying to break the mould and do something different. But the square corners just looked wrong... 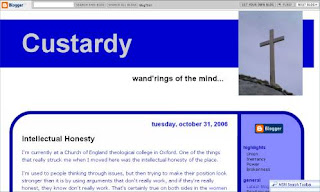 This was a nice, stable design, but I ended up having to use absolute positioning to get the border graphics lining up in both IE and Firefox. And it just got a bit boring after a while... 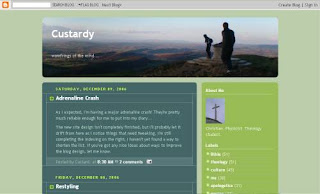 And so onto today's. I've been wanting to use that photo since I took it. I'd better stop now, before I turn into one of those old men who just goes on and on about things that nobody cares about.... (some would say it's already too late)

Email ThisBlogThis!Share to TwitterShare to FacebookShare to Pinterest
Labels: history, me