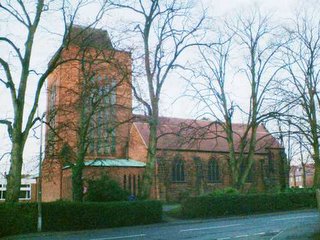 Several people said "hello" as if they knew me, though they didn't. No-one got beyond that and there didn't seem to be tea or coffee afterwards.

The more modern of their two morning services - I think the other one was a sung eucharist or something. The order of service wasn't really announced, but there was a booklet in the pews with it in. It was a modern CW communion.

Very much modern catholic. There were probably about 100 there once the children came in, average age beforehand was 50ish, but with some in each age range. Far more women than men. No Bibles in pews, nor were they provided at the door.

How was it Catholic?

The front of the church was fairly old, with quite a few candles, a lady chapel, robed servers, chunks of the service done east-facing (though not the communion). The (female) leader wore a chasuble, the lay reader robed, there was a gospel procession, the choir processed in and out, etc.

How was it modern?

The tower looks like unfinished concrete on the inside, and has a lot of glass. The choir weren't robed, and hymns and quite a bit of the liturgy were on an OHP. Music was done by a music group - piano and a couple of woodwind instruments, mostly played by middle-aged men. After the eucharistic prayer, they mainly did 70s/80s devotional stuff, before that it had been more older easy-listening.

As it was the Week of Prayer for Christian Unity, the speaker was the minister of Bramhall Christian Fellowship. It wasn't expository, but was a brief talk about how the gospel was simple - that God wanted to live in us. Definitely OK, but gave the impression there wasn't a lot of intellectual depth there (too many minor factual errors in his examples didn't help). Rumour has it that it was better than the usual sermons there...