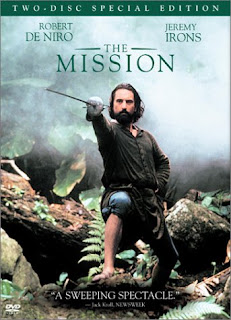 This is an extraordinary film, and thoroughly worth watching.

Jeremy Irons plays a Jesuit missionary to a remote tribe in the South American jungle, at a time when slave trading and politics both threaten the area. It's really well acted - Robert de Niro is another major character but I think Irons is even better.

His character is so clearly totally sold out for Jesus, and so clearly willing to die for him and for the people he is seeking to reach. Lots of stuff too about the importance of what was effectively an early form of native farmers' co-operatives and the dangers of church politics. All in all, a brilliant and very moving film.

And the music! Don't forget the magnificent film score.