We virtually stumbled across this when we were in Rome. We weren't looking for it; it doesn't get a big billing in the guide books. Yet it was one of the most moving places we visited. No cost to get in, but there was a box for donations. 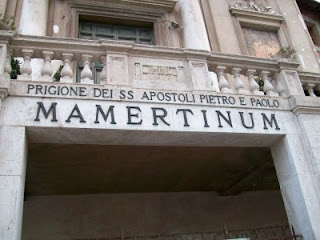 I've done some reading on it since.

When we visited, there were two rooms. The first, was at modern basement level, which was Roman street level. Below that was another room, which could be reached by a staircase. In that room was a hole in the floor with a well in, a small altar, and a large iron door. 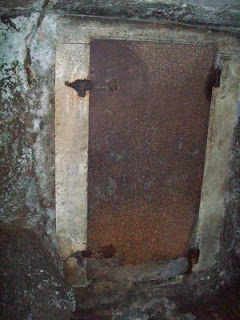 There was also a hole in the floor of the upper room with a grating over it. This hole became a skylight in the lower room.

However, in Roman times, the stairs did not exist. In Roman times, the lower room was a notorious prison cell, accessed only via the hole in the ceiling. It was famously damp - the spring made sure of that, and it was often flooded. The iron door was put in by the Romans. It apparently leads to a passage to the main Roman sewer, and allowed for the disposal of dead bodies.

It was in this cell that high-security prisoners were kept prior to execution. Christian tradition says that both Peter and Paul were kept there for a while before their executions under Nero. 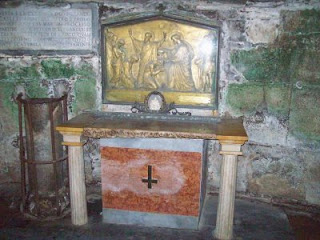 The altar has an inverted cross on, because traditions records that Peter was crucified upside down because he said he was unworthy to die in the same way as his Lord. Paul, being a Roman citizen, was exempt from crucifixion, so was beheaded.

It is quite possible that this cell is the very place where Paul wrote this:

For I am already being poured out like a drink offering, and the time has come for my departure. I have fought the good fight, I have finished the race, I have kept the faith. Now there is in store for me the crown of righteousness, which the Lord, the righteous Judge, will award to me on that day — and not only to me, but also to all who have longed for his appearing.
2 Timothy 4:6-8, NIV