Brazil is a country with virtually no social security and where politicians are famous for being corrupt. As a result, society genuinely seems to go all the way down. If human existence is possible at a given level, there will be people there, it seems, from the luxury beachside flats to scavenging with the vultures on a rubbish dump. 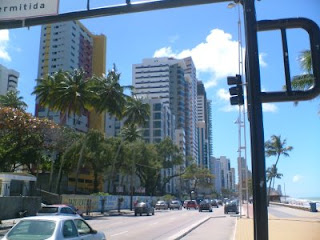 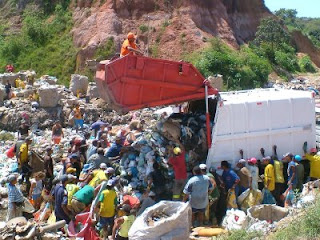 I used to wonder why there was no household recycling here. Now I realise that it is a mercy that there is not - recyclable material is a major source of income for those at the rubbish dump.

Here there is capitalism in a way that doesn't seem to exist in either the UK or the US. Politicians are widely viewed as corrupt, and voting is compulsory. That means that votes in the poorest areas can be essentially bought for as little as a T-shirt or $1 a day to stand by the side of a road in the hot sun waving a flag. And the politicians have very little incentive to do anything about it. Free schools in the poorest areas are apparently next to useless, and free hospitals are described by Brazillians as abattoirs. And even if the poorest children did go to school, they would still need money to survive and so have to work. 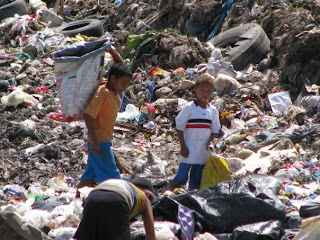 The poverty here is shocking. And without the poorest children having access to good schools, there seems to be little to keep them from following in the same poverty as their parents. Brazil is the country with the biggest financial difference between rich and poor in the world, and it doesn't seem to be going away any time soon. Keeping the poor poor keeps their votes cheap.

Now I think I understand something of the oppression of the poor, and a tiny bit of God's anger against it.