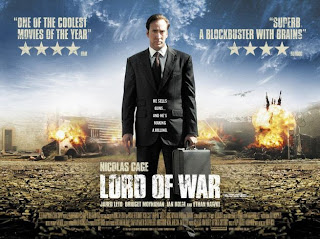 I guess the best film to compare this with is Blood Diamond. They're similar in a lot of ways (this was made first). Both are about huge problems facing Africa largely caused by the West - in this case arms trading, with the central character here being an arms dealer who specialises in selling to Africa. Both films are very hard-hitting.

For what it's worth, I think that Blood Diamond was probably slightly the better film, but that Lord of War was harder-hitting.

What I didn't realise until renting the DVD was that this is Andrew Niccol's fifth film (after Gattaca, The Truman Show, S1m0ne and The Terminal). I knew I was a fan of his work already. I even quite liked S1m0ne, despite the appalling computer virus scene... Most of his films even seem to have a conscience, which is great.