I went to see this film last night with some friends. 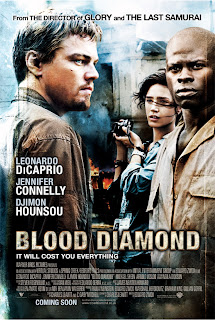 It's about the war in the 90s in Sierra Leone - how it's fuelled by diamonds and by people's greed, the child soldiers, the suffering, the destruction, the complicity of the West, people becoming hardened to violence, the mess that is so much of Africa. Leonardo diCaprio and Djimon Hounsou are excellent in the main roles as a cynical Zimbabwean mercenary / diamond smuggler and a fisherman who finds a huge diamond.

There are some excellent sermon illustrations, especially along the lines of the relationship between Hounsou and his son, who is captured by the rebels and trained to be a child soldier... Also lots of memorable lines, often with good visual illustrations. If I'd made it, I'd have made the ending nastier.

Great film, hard-hitting. Not for the especially faint hearted though, but given the subject matter it could have been a lot worse (15 rather than 18).