A few weeks ago, I was having a conversation with a friend. She said she only liked happy films, because they cheered her up. But I like sad films too, and that got me wondering why. 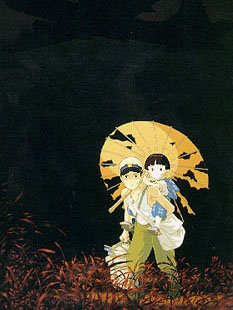 Take Grave of the Fireflies, for example - the film we were discussing at the time. It is a very sad film about two children struggling (and ultimately failing) to survive in Japan at the end of World War 2, starting with the Kobe firebombings. And no, it's not a surprise that they don't make it to the end of the film; the film starts with the second one dying.

But it's a beautiful film too. The firefly - shining so brightly and with so much pleasure, then dying all too soon - is a metaphor used heavily in the film. There's a point where they choose, quite clearly, to be like fireflies, enjoy life and die rather than probably survive but in drudgery.

I guess it's a question of how we deal with the difficulties of suffering and the fact that all too often the world sucks. We can try running away from it and only thinking about the good, which seems to be what my friend was doing. We can see the bad, recognise it is there and still see good and beauty in it, which is what Grave of the Fireflies does so well. But probably my favourite sort of film in general is the type where things get really bad, then good comes out of it. After all, that's what God says this life is like; that's what happened with Jesus.

Which attitude is going to help when things get really bad - to ignore suffering or to look through it and see the joy that lies beyond? Thinking about it, I can see why my friend only likes happy films. She's not a Christian, and she's clever enough to realise that without God, there is no real hope in the face of suffering, except that it would go away. But that's not where I am. I see God through the tears. I see that even when things were as bad as they could get - when Jesus Christ was being killed on the cross, then God was working; that he was using it to accomplish his purpose, and that the world is better now for it, and we can see God more clearly.

To quote one of my favourite films:

It's like in the great stories... the ones that really mattered. Full of darkness and danger they were, and sometimes you didn't want to know the end, because how could the end be happy? How could the world go back to the way it was when so much bad had happened?

But in the end, it's only a passing thing - the shadow; even darkness must pass; the new day will come. And when the sun shines, it will shine out the clearer. Those were the stories that stayed with you - that meant something - even if you were too small to understand why.

Sam, from Lord of the Rings - The Two Towers