Brazil 7 - Eating Out No Brasil

These are things they don't say in any of the stuff I'd read on Brazil...

In Brazil, the portions specified on the menu usually serve far more than one person (but the menus don't tell you this or indeed how many they serve), and it is quite normal for a table to receive only one or two dishes of main course, and for the plates to already be on the table when the diners sit down.

They say in Italy that it is very hard to be a vegetarian and eat out. In Brazil, it is very hard to get vegetables at all when you eat out. I was at an upmarket Italian restaurant yesterday, and of 100 or so dishes on the menu, only one that I noticed came with vegetables. And because of the contraints hinted at above, none of the four main courses that were delivered to our table of 9 or so had vegetables. Potatoes of various varieties and rice are common, and some dishes contain beans and/or olives. But I mentioned to a Brazillian that in England we are supposed to eat 5 helpings of fruit or veg per day. He laughed and guessed that he ate 1. And that seems to be the expected norm.

Because of that (and because it is easy to order), I tend to drink fruit juice when eating out. Now fruit juice comes in two major varieties. Normal fruit juice is sweetened, but occasionally you find somewhere that does very very nice unsweetened fruit juice, at which point it seems normal in Brazil to request extra sweetener.

And that brings me neatly onto puddings. I'm normally a big fan of puddings, and I often like them quite sweet, so one might think I'd be on to a winner here. What I wasn't prepared for was the sheer quantity of sugar...

For example, in a fairly upmarket restaurant, I ordered apple pie and ice cream. was glad that I had when I tried a friend's chocolate mousse, which seemed to consist almost entirely of sugar. But then this came... 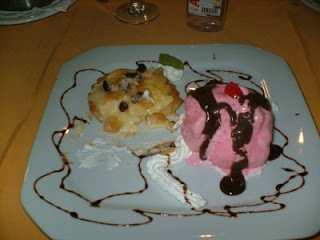 It's also worth another comment on the phenomenon of sweet pizzas... 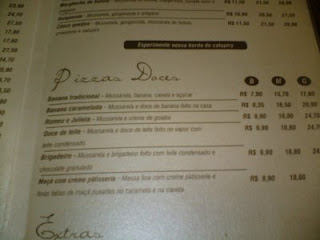 If I had to make a choice now between being vegetarian for life and eating normal Brazillian food for life, I'd pick vegetarianism at the drop of a hat. It doesn't surprise me at all that there is an epidemic of diabetes among the middle classes here. It only surprises me that no-one seems to be trying to do anything about it except the manufacturers of artificial sweetener.